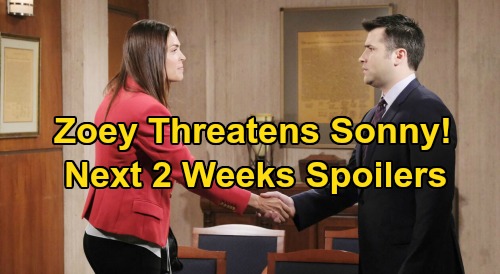 Days of Our Lives (DOOL) spoilers for the next two weeks tease that some surprises are coming up in Salem. During the week of May 4-8, Nicole Walker (Arianne Zucker) will do something special for Eric Brady (Greg Vaughan). Eric’s been down in the dumps since finding out the truth about Mackenzie “Mickey” Horton, so Nicole will try to lift Eric’s spirits.

Since Nicole always manages to do that anyway, she should have no problem putting a smile on his face. “Ericole” fans should enjoy their sweet time together as Eric begins to heal his broken heart.

Next, Zoey Burge (Kelly Thiebaud) will use some intimidation tactics. When Zoey meets Sonny Kiriakis (Freddie Smith), she’ll try to bully him a bit before he takes the stand in court.

Rex Brady (Kyle Lowder) will make a phone call to Kristen DiMera (Stacy Haiduk), but he’ll be knocked out before he can deliver the full scoop about Rachel DiMera Black.

Of course, Sarah will be the one who strikes the blow. She’ll hold Rex hostage while Lani Price (Sal Stowers) traces that call and figures out Sarah’s in Paris. Lani will help Kristen make a quick getaway, so that’ll bring backlash with Eli Grant (Lamon Archey).

Other Days of Our Lives spoilers say Hope Brady (Kristian Alfonso) and Steve Johnson (Stephen Nichols) will connect over their similar struggles. As Steve and Hope work to put their tough ordeals behind them, they’ll share some laughs and live it up.

Hope and Steve will even destroy “Steveano’s” portrait together, so they’ll definitely get some satisfaction out of that. Kayla Brady (Mary Beth Evans), on the other hand, won’t be as pleased by all this bonding. She’ll be irritated over Steve’s decision to move in with Hope, so Marlena Evans (Deidre Hall) may wonder why that is.

Marlena might suggest that Kayla would rather have Steve home with her. Naturally, that can’t happen since Kayla lives with Justin Kiriakis (Wally Kurth), but that’s just another reason to reevaluate this situation. Kayla will have to determine if she’s willing to fight for Steve in the coming weeks, so it’ll be a lot to ponder.

Other Days spoilers say Gabi DiMera (Camila Banus) will slap Jake Lambert (Brandon Barash) over what she assumes is his deception. Gabi will think lying Stefan DiMera (Brandon Barash) has taken on a new identity, but he’ll insist that’s not true.

Later, Gabi will give Jake a steamy kiss, but he’ll act like Gabi’s lost it. Jake will even ask if Gabi’s taking any prescription medication!

At the garage, Ben Weston (Robert Scott Wilson) will be beaten by thugs looking for Jake. After Ciara Brady (Victoria Konefal) patches Ben up, he’ll talk to the cops before speaking with Jake.

Ben will want to know about Jake’s background and how it led to these guys coming after him. It’ll be clear to Ben that Jake’s in major trouble.

During the week of May 11-15, Days of Our Lives spoilers say Ben will ask Ciara to marry him. That’s right, “Cin” fans! It’s finally happening. Ben and Ciara will get engaged following an adorable proposal, so Ciara will have important updates for her mom.

Hope may have mixed feelings about this engagement, but she should be happy for the most part. Thanks to Hope’s “Princess Gina Von Amberg” ordeal, she doesn’t think she’s in the position to be judging people.

Since Hope’s transformation was almost like a mental illness, she may even understand Ben on a deeper level.

Other DOOL spoilers say Abigail DiMera (Kate Mansi) will suffer from more hallucinations. Since that DiMera-developed drug messed with the chemistry of Abigail’s brain, she’ll be seeing things on her own.

As a result, Abigail will launch a terrifying attack on Kate Roberts (Lauren Koslow). Kate should land in danger briefly, but Abigail won’t be able to do serious damage.

Back with Zoey, she’ll fight hard for Evan in court and await his verdict along with Orpheus (George DelHoyo). Later, Orpheus will give Marlena Evans (Deidre Hall) terrible news. “Doc” will likely find out her beloved John Black (Drake Hogestyn) has been kidnapped!

John won’t be returned until Orpheus gets the money he wants, so Marlena will need Hope and Steve’s help with the rescue.

Orpheus will snatch David Ridgeway (Caleb and Kyler Ends) as well, so this double DOOL abduction will really shake things up! Days spoilers say some exciting stuff’s in store. CDL’s your one-stop source for fantastic Days of Our Lives spoilers, updates and news.