Days of Our Lives Spoilers Next 2 Weeks: Kidnapping, Betrayal & Bayview Beauties – Only Gwen Can Save Gabi 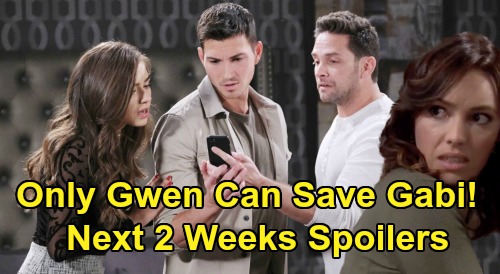 Days of Our Lives (DOOL) spoilers for the next two weeks tease that we’ll see plenty of heartache and conflict in Salem. During the week of June 1-5, Sarah Horton (Linsey Godfrey) will slam Victor Kiriakis (John Aniston) for her baby switch pain. After Marlena Evans (Deidre Hall) intervenes, she’ll advise Sarah to let go over her rage or else she’ll just create more problems for herself.

Marlena will also bring up the idea that Sarah might still be in love with Xander Kiriakis (Paul Telfer), which Sarah will balk at. Even so, Sarah will have to mull over the possibility.

Of course, any chance of reconciliation will fly right out the window when Brady Black (Eric Martsolf) rats Xander out. Brady will tell Sarah that Xander was part of a plot to steal her embryo and give it to Kristen DiMera (Stacy Haiduk).

When Xander protests that Sarah was going to terminate the pregnancy anyway, Sarah will give him a good smack. Over with Claire Brady (Olivia Rose Keegan), she’ll beg Marlena to approve her early release from Bayview.

Marlena will need a little time to think about that, so she’ll go home and fill John Black (Drake Hogestyn) in. Days of Our Lives spoilers say John will wonder if Claire’s truly ready.

Once Marlena decides Claire deserves a chance to prove herself on the outside, Shawn Brady (Brandon Beemer) and Belle Brady (Martha Madison) will reenter the picture. They’ll show up during the week of June 8-12 to help make some choices about what’s next for Claire.

Although Belle and Shawn will want Claire to head back to Hong Kong with them, Claire will insist on staying in Salem. She’ll argue that she wants to fix things with Ciara Brady (Victoria Konefal), so they’ll all settle on Claire moving in with Marlena. As for Belle and Shawn, they’ll be sticking around town for a bit as well.

Other Days spoilers say Gabi DiMera’s (Camila Banus) disappearance will bring concerns for Will Horton (Chandler Massey) and Sonny Kiriakis (Freddie Smith). They’ll realize this may have something to do with Jake Lambert (Brandon Barash), so they’ll urge Jake and Ben Weston (Robert Scott Wilson) to tell them what’s going on.

Will and Sonny will naturally be worried about Arianna Horton’s (Sydney Brower) mom, but Jake and Ben may not offer up too much info. However, there’ll soon be a desperate search for Gwen (Emily O’Brien).

Ben and Ciara will team up to help Jake, who’ll try to figure out where Gwen might’ve gone. It turns out finding Gwen will be essential if Jake hopes to rescue Gabi.

Gwen will be busy chatting away with her Bayview friend, Claire – at least until Claire walks free. As for Ciara, she’ll have an overwhelming sense of dread about Claire getting out of Bayview so soon. Ciara will need Hope Brady’s (Kristian Alfonso) support as she prepares for an awkward reunion.

Back with Xander, he’ll have a chat with Jack Deveraux (Matthew Ashford). Xander may point out that Jack’s done some terrible things, but he’s been able to shake that negative image.

It looks like Xander will want some tips on how to win Sarah’s heart again. As for Brady, he’ll remain committed to destroying Titan Industries. Thanks to some of Brady’s upcoming moves, Ciara will start to get suspicious. Ciara will corner Brady and demand the truth about his motives, so we’ll see how Brady handles that tricky situation.

Rafe Hernandez (Galen Gering) also has some devastating updates ahead of him, so he could be poised to lose custody of David Ridgeway (Kyler Ends). Zoey Burge (Alyschia Ochse) will certainly fight hard for her nephew, so stay tuned to see if she can pull off a victory.