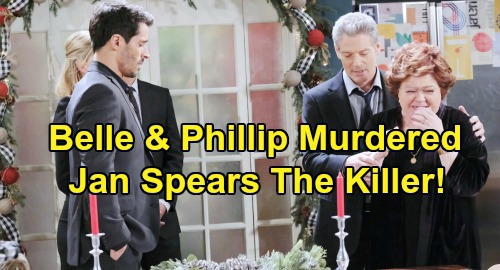 Shawn Brady (Brandon Beemer) then arrived and gave Belle and Phillip a chilly reception before announcing that he spoke with Rex Brady (Kyle Lowder), who was arranging for Mimi Lockhart’s (Teressa Liane) body to be shipped back to Chicago. He also noted that Rex was trying to track down Bonnie Lockhart (Judi Evans), who is currently on her book tour.

While Craig comforted a distraught Nancy, Shawn revealed to Phillip and Belle that he was with Mimi shortly before her death, and that they had kissed, but Mimi wanted nothing to do with that, so he left, which is when the killer must have attacked her.

They established that Susan Adamson (Lindsay Hollistar) had headed back to Atlanta, but that she hadn’t made it home. They worried that perhaps Susan had been murdered, too.

Shawn, Belle, and Phillip then wondered whether someone had it in for the Last Blast crew, and Jason Welles’ (Aaron Van Wagner) name came up as a possibility, since they know he has anger issues. Shawn shared that a friend of his at the NYPD discovered that Jason had pulled a knife on someone at a bar, which sounded a little too close to home.

Phillip wondered if there was something they could do to find Jason, and Shawn suggested that he do something to lure Jason out. Phillip noted that this isn’t high school anymore, and this time the blood Jason spilled isn’t chicken’s blood, which led to a flashback of when Jason dumped chicken’s blood all over Phillip at the high school dance. The three of them then decided that they had to do something to help put Jason away.

Later, by themselves Shawn and Belle regrouped and Shawn revealed that Phillip got Jason to meet him at .com later under the guise of discussing capital for a business venture. Belle told Shawn to be careful, and that later they should talk. Shawn said maybe and left, leaving Belle melancholy.

Shawn then headed to .com. He walked into the dark cafe and saw Phillip sitting at a table. He called out to Phillip but when he touched him, Phillip fell over, with a knife sticking out of his back. Shawn then fell back, right into Jason, who was also dead on the floor. Shawn then realized that if Jason didn’t do it, then the killer must still be out there, and Belle was in terrible danger.

Shawn raced to Belle’s hotel room, where he burst in and found her dead on the bed, with a knife sticking out of her chest. He was horrified and flashed back to several memories of them in happier times, including when he asked her to marry him. Suddenly, the door to the bathroom opened and someone walked out. Shawn looked up and saw Jan Spears (Heather Lindell) standing there.

Shawn was stunned to see Jan. “Hello Shawn,” she said. “They’re all dead now. Looks like it’s just you and me. Just the way it was meant to be.” Shawn was horrified and terrified about what Jan might do next. Looks like we have our “Last Blast Reunion” killer – Jan Spears!