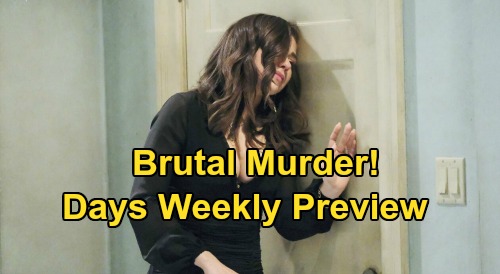 Days of Our Lives (DOOL) spoilers preview teases that viewers are in for an explosive week of hot romance, intense confrontations, a major health crisis, and some sheer terror. The new DOOL preview promo for the week on August 24 promises a lot, so let’s get right into it.

First off, Eve Donovan (Kassie DePaiva) will get a big surprise as she visits her daughter Paige Larson’s (True O’Brien) gravesite. Eve will look up as she sits at the grave, and suddenly Paige will appear!

“Oh my God, you’re alive!” Eve exclaims, while Paige smiles at her mother. It seems that this will simply be a vision of Eve’s, and it could occur in her final free moments.

Rafe Hernandez (Galen Gering) found out at the end of Friday’s episode, August 21, exactly where Eve was, which likely means that he and Hope Brady (Kristian Alfonso) will head over to the motel where Eve’s been staying.

One wonders exactly what Paige will tell her mother, but since this will be Eve’s vision, it’s likely that Paige could egg her mother on in her quest for revenge against Ben Weston (Robert Scott Wilson). At any rate, Eve’s time in Salem as a free woman will be coming to an end shortly.

Of course, DOOL viewers know that Gabi and Jake have been attracted to each other for a while now, but it looks like the two will finally give into their passion.

“I’m attracted to you,” Gabi says. “You’re not really attracted to me – I look like your dead husband,” Jake replies before they kiss and fall onto the bed together. As the preview states, the romance is pure fire!

Meanwhile, Rafe will be dealing with an intruder in his home, as he’s shown holding someone at gunpoint at the Hernandez house. Turns out, it will be Eduardo Hernandez (A Martinez) decked out in a hoodie, but Rafe will quickly realize who it is. “Dad, what are you doing here?” Rafe asks.

Eve recently got a call from Eduardo, and she wasn’t happy about it. Eduardo may have some unfinished business with Eve, but it also seems that he’ll have some dire news for Rafe and Gabi.

Days of Our Lives spoilers indicate that Eduardo will have someone heavy after him, and he’ll be in Salem to warn Rafe and Gabi that they could be targets, too! This will pave the way for Rafe’s and Gabi’s temporary exits from the show.

Well, now John is in the hospital and unconscious, and it looks like that will remain the case, as the promo shows John laying in his hospital bed, with Marlena Evans (Deidre Hall) and Eric Brady (Greg Vaughan) praying together in the chapel.

But the big drama will come when Belle Black (Martha Madison) finds out that John was arguing with Sami in the moments leading up to the aneurysm. It looks like Sami will confess what happened to Marlena, and Nicole Brady (Arianne Zucker) will find out and blab the truth to Belle, who will then turn on Sami big time.

“What you said to him could be the last words he ever hears!” Belle fumes at Sami. It’s going to be a bad scene between the sisters.

Well, because of the blowup between Belle and Sami, Belle will be out of commission as Sami’s lawyer in the custody case, so Sami will end up representing herself during the custody hearing.

That should make for some interesting moments, as Sami is shown in the promo blurting out that Nicole is an unfit mother to the court. It looks like some big courtroom drama is in store here, as Nicole and Sami duke it out publicly.

Finally, some truly frightening moments are in store for Ciara Weston (Victoria Konefal), when Ben takes her to the abandoned dorm room where he strangled Paige. Ciara won’t know where they’re going or why they’re there, but she’ll soon learn exactly where she is, and she’ll be faced with a menacing Ben.

Of course, DOOL viewers know that Ben has been drugged and brainwashed by Eve and her henchman Vincent (Michael Teh) into doing this, and Ciara will probably figure out what’s going on.

However, the fact will remain that Ciara will still be in danger, since Ben will be out of control. The promo shows a really scary moment where Ben menacingly tells Ciara that they’re in the room where he strangled Paige and Ciara notices that Ben’s holding a necktie in a menacing way.

From here, some scary scenes should unfold, as Ciara realizes that she’s in real danger. She’ll no doubt try to talk Ben down and get through to him – but will she succeed? Ciara vanishes from Salem and Victoria has her final airdate on August 26, so this doesn’t look like a happy ending!

It looks like we’re in for an exciting week full of explosive drama! Stick with CDL, and we’ll be sure to give you updates as more DOOL news comes in. Be sure to check back with us frequently so you don’t miss a thing!