Days of Our Lives Spoilers: Rafe’s August Exit – Reunites with David, Gets Another Chance to Be His Dad? 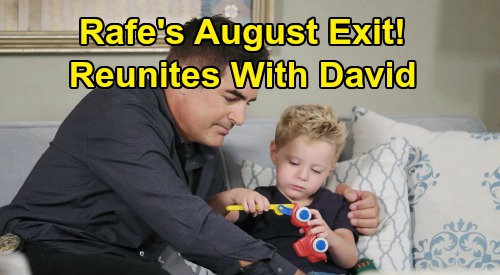 Days of Our Lives (DOOL) spoilers reveal that many fans were just as heartbroken as Rafe Hernandez (Galen Gering) when he lost custody of David Ridgeway (Kyler Ends). In the beginning of that storyline, Days dropped the ball by not including David very much. It was tough to care when David got kidnapped the first time around since we’d barely seen the kid.

Fortunately, DOOL made things right once Orpheus (George DelHoyo) snatched David up again. David became an adorable part of the action with John Black (Drake Hogestyn). Days also started revving up some warm moments between David and Rafe, who had always served as a father figure to this sweet boy.

By the time Zoey Burge (Alysha Ochse) scored custody, it was hard to say goodbye to little David. He melted fans’ hearts with his favorite word “yeah” and his cute spiky hair. Most of us feel Rafe’s pain and are missing David now. However, maybe there’s still a chance that Rafe will be reunited with David down the road.

Zoey promised that Rafe could come visit David, so at least that offer’s on the table. Rafe was quick to point out that Zoey lies sometimes, but she really does seem open to Rafe being in David’s life.

Zoey even went in for that awkward and inappropriate hug with Rafe before her departure. We don’t know what the heck Zoey was thinking with that, but it did make her appear genuine in the moment.

Of course, visits aren’t the same as being a true dad to David. Could Rafe still get that opportunity? Days of Our Lives spoilers say Rafe will be exiting the canvas down the road.

His onscreen departure was originally supposed to happen in September, but it looks like it’ll be August now. DOOL is skipping previously scheduled sports preemptions, so that’ll affect things like return and exit airdates.

When Rafe leaves, will it involve moving closer to David? Could David even score custody again and leave town to be with him? After all, Zoey’s got a target on her back now that she’s on Orpheus’ bad side.

Zoey could even face some horrible luck and die in an accident. Then again, maybe Zoey could land in a coma or find herself in need of long-term care for a serious illness.

Bottom line, there are plenty of ways for Days to push Zoey out of the picture and let Rafe take over. It’s easy to imagine Zoey’s wishes dictating that Rafe would fill in if she couldn’t. Rafe might not want to uproot David from his new life and could just move to where David lives now.

Regardless, it’d be nice to see some form of a happy ending for Rafe. A reunion where he can serve as David’s dad again would fit the bill. In the meantime, Days of Our Lives spoilers say Allie Horton (Lindsay Arnold) will have to decide who to give her baby to.

Rafe may be a daddy contender, although Will Horton (Chandler Massey) and Sonny Kiriakis (Freddie Smith) might win out eventually. If Rafe loses this second-chance kid, that’ll be one more reason why he deserves to reunite with David!