Days of Our Lives Spoilers Recap: Thursday, May 14 – Evan Gets 20 Years – Zoey Wants To Tell Rafe About A Murder

BY hellodrdavis on May 14, 2020 | Comments: Leave Comments
Related : Days of Our Lives, Soap Opera, Spoiler, Television 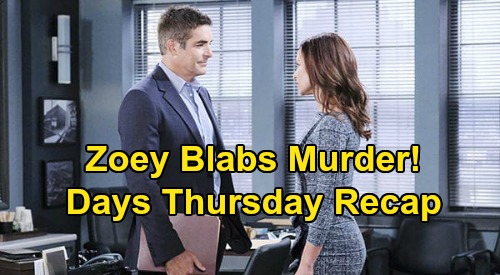 Days of Our Lives (DOOL) spoilers recap for Thursday, May 14, reveal that Lani Price (Sal Stowers) will approach Eli Grant (Lamon Archey) in town square. Eli will brush Lani off, and Lani will say that she understands that Eli is still upset with her about helping Kristen DiMera (Stacy Haiduk) escape. Lani will insist that she’s going to confess to Rafe Hernandez (Galen Gering), and she’ll run off with Eli calling after her.

At the police station, Rafe will get a call saying that Evan Frears aka Christian Maddox’s (Brock Kelly) verdict is in. Lani will rush in wanting to talk to Rafe, but he’ll have to go to the courthouse pronto.

Rafe will leave, and Eli will walk in asking if Lani confessed yet. Lani will say no, but she’s going to tell Rafe when he returns. Eli will say that they should talk about that.

At the courthouse, Evan will approach Zoey Burge (Alyshia Ochse) wondering whether the verdict will be good news or bad news. Orpheus (George DelHoyo) will materialize and he’ll wonder the same thing.

Evan will express his confidence in Zoey, and he’ll head into the courtroom, while Orpheus and Zoey remain in the hallway. Orpheus will say that Zoey better have pulled this off, because Evan’s future is on the line.

Later, Rafe will arrive in the hallway and see Zoey coming out of the courtroom looking glum. Turns out, Evan was found guilty and got 20 years in prison for Jordan Ridgeway’s (Chrishell Stause) murder.

Rafe gloated to Zoey and to Orpheus, who joined them. Soon, Evan came out in handcuffs and Rafe left with him to make sure he got to Statesville.

Orpheus then turned to Zoey and told her this was all her fault for not putting Evan on the stand. Zoey said she’d appeal the case, but Orpheus said he was rethinking letting her handle any of this.

Back at the police station, Eli and Lani went into the interrogation room and Lani said that there was nothing more to say – she needed to confess to Rafe. Eli said that she could get locked up and that he didn’t want that to happen.

Lani was surprised, and Eli said that he understood why Lani helped Kristen. Eli said that it would stay between them, but Lani didn’t want to put him in that position.

Eli said he was willing to keep the whole thing to himself, and that he loved Lani and didn’t want to lose her again. Lani said she wouldn’t ask Eli to keep this secret, and Eli noted that she hadn’t asked, and that he was going to let it go.

Eli and Lani kissed, and Rafe walked in and interrupted them. Lani noted that Rafe was in a good mood, and Rafe shared the news about Evan’s sentence.

Rafe then asked Lani what she wanted to tell him earlier, and Lani said that she just wanted to update him on Kristen’s case, and that Kristen had taken off with the baby. Rafe asked if there were any leads, and Lani said no.

At Jake Lambert’s (Brandon Barash) garage, Jake asked what Gabi DiMera (Camila Banus) was doing there, and she handed him some antibiotic cream that he had lent her after her fall.

Then, Gabi rummaged in her purse and pulled out the syringe, walking toward him. Suddenly, Ben Weston (Robert Scott Wilson) rushed in and grabbed the syringe out of Gabi’s hand.

Ben interjected that Stefan was dead, and Gabi revealed that Wilhelm Rolf (William Utay) said that Jake was Stefan. Jake thought the whole thing was ridiculous.

Gabi furiously tried to explain to Ben that the syringe contained the same serum that Will Horton (Chandler Massey) used to get his memory back. Gabi told Ben that he owed it to Stefan to help him get his memory back, and Ben said there was no way he was letting Gabi inject Jake with the contents of the syringe.

Ben wanted to call the cops, but Jake protested, saying they didn’t want to get the cops involved. Ben took off with the syringe, leaving Gabi furious. Jake told Gabi to leave, but she said that she just had one more thing to say.

Gabi pleaded with Jake to take the serum, saying that Will got his life back, and that Jake could have the same thing. Gabi said that they could still be happy together, and Jake told her to let it go.

At the hospital, Abigail DiMera (Kate Mansi) hallucinated and “saw” Stefan, Ben, and Gabi looking at her menacingly. Abigail told Chad DiMera (Billy Flynn), Jennifer Deveraux (Melissa Reeves), and Jack Deveraux (Matthew Ashford) what she was seeing, and she told them that she needed help. Marlena Evans (Deidre Hall) walked up and suggested they get Abigail back to her room.

Chad, Abigail, and Marlena went to Abigail’s room and Abigail told Chad and Marlena about what happened earlier at the DiMera mansion, and about how she “saw” Stefan, Ben, and Gabi just moments ago.

Chad thought that Abigail was seeing Gabi because Gabi’s a threat. Suddenly, Abigail “saw” Orpheus in the room, worrying Chad and Marlena.

Marlena gave Abigail something to help her sleep, and she suggested that Abigail get some rest. Meanwhile, Jack and Jennifer commiserated in the waiting area. Jack comforted Jennifer and reassured her that he was by her side for all of this.

Jack and Jennifer prayed that Marlena could help Abigail, and they went to Abigail’s room and watched her as she slept.

Marlena went to the waiting area, when Ben approached her wanting to talk. Ben asked Marlena to analyze the contents of Gabi’s syringe. Marlena asked where Ben got the syringe, and Ben said he caught Gabi trying to inject his new boss with it.

Marlena agreed and left, then Chad approached Ben, having overheard Ben’s conversation with Marlena. Chad said that Ben was the eyewitness he needed to put Gabi away.

Finally, Marlena went to her office and was on the phone arranging some sort of consult for Abigail when Orpheus walked in the door. With her back to the door, Marlena told the person on the other end of the phone that she was very worried about Abigail. Orpheus startled her, saying, “The one you should be worried about is yourself.”

That was a terrific episode of Days of Our Lives! Be sure to stay tuned to the NBC soap, as there’s another all-new episode tomorrow. Here at CDL, we’ll keep you up to date on the latest DOOL news and spoilers. We’ve got all your soap updates right here!