Days of Our Lives Spoilers: Rex Brady Meets Sarah and Rachel In Paris – Convinces Desperate Ex To Return To Salem? 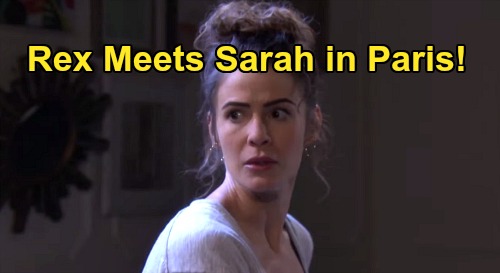 Days of Our Lives (DOOL) spoilers tease that a familiar face will be back on the DOOL scene very soon. As DOOL viewers know, Sarah Horton (Linsey Godfrey) was horrified to learn that the little girl she’s believed is her daughter Mackenzie “Mickey” Horton is not actually her daughter. Sarah prepared to give her daughter, who’s really Rachel Black, over to Kristen DiMera (Stacy Haiduk) and Brady Black (Eric Martsolf), but then she got another idea.

Sarah ended up running off with Rachel, as she was simply unwilling to relinquish the little girl. Sarah and Rachel took off on the Titan jet for parts unknown, but DOOL spoilers indicate that they’ll end up in Paris where they’ll hide out and hope that nobody finds them.

However, DOOL spoilers say that Sarah will unexpectedly run into Rex Brady (Kyle Lowder) in Paris, and it will be quite a shock.

Of course, the last we heard about Rex, he was living in Chicago to be close to his daughter Emily Brady, whom he shares with Mimi Lockhart (Farah Fath). So for him to show up in Paris in the same proximity to Sarah will be quite the coincidence – and perhaps the lucky break that Kristen and Brady need as they search for their daughter.

At this point, Sarah is a fugitive and has kidnapped Rachel, so she’s probably going to be unhappy to see Rex. It seems that, at least initially, Rex won’t know about the baby switch that went down, and he won’t realize that Sarah is a fugitive and is in possession of someone else’s child. It looks like Sarah and Rex will simply bump into each other and that Sarah will try to pretend that all is well.

But DOOL spoilers also say that shortly after Rex encounters Sarah, he’ll learn that she’s on the run with Rachel. It’s likely that Brady or someone else will contact Rex to see if he’s heard from Sarah, and that will tip him off that Sarah’s in a real bind.

It looks like Rex will probably be in a position to help Sarah and perhaps try to convince her to return to Salem with the baby.

It could come right down to the wire, though. Days of Our Lives spoilers say that as Rex is learning about Sarah’s predicament from someone in Salem, Sarah will be preparing to flee Paris with Rachel.

Perhaps Rex will be able to stop Sarah from taking off again, but he’s going to have to be pretty persuasive and work fast, since Sarah really seems like she’s determined to disappear with the little girl.

At any rate, it will be good to see Rex back on the DOOL scene, and let’s hope that he can talk some sense into Sarah. It would certainly be better for Sarah from a legal standpoint to return voluntarily with Rachel than to be apprehended and face the music that way.

Do you think that Rex will get Sarah to rethink her plan to flee and return to Salem? Stay tuned to Days of Our Lives and remember to keep CDL bookmarked for all the new DOOL spoilers and news.