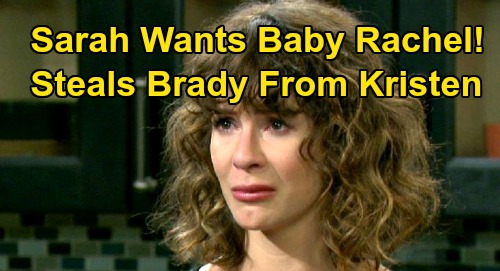 Days of Our Lives (DOOL) spoilers tease that Xander Kiriakis’ (Paul Telfer) secret is almost ready to blow. Nicole Walker (Arianne Zucker) suspects Mackenzie “Mickey” Horton was swapped with Rachel DiMera Black that fateful night. Once Nicole proves it, she’ll have no choice but to tell Eric Brady (Greg Vaughan). Nicole will realize honesty is the best policy, but this news will break several hearts.

Of course, Eric will be crushed to learn Mickey isn’t really his daughter, but Days spoilers say it’s Sarah Horton (Linsey Godfrey) who should end up most heartbroken. Even when Eric was deceived about Mickey, Sarah’s been right by her side. She’s raised this child as her own from day one, so this is sure to be a devastating revelation.

Xander’s part in the cover-up should add to Sarah’s pain – especially now that he’s her fiancé. This engagement seems doomed, but what happens after that? Sarah’s bound to seek sympathy from someone after the big reveal. What better person than Mickey aka Rachel’s biological father?

Brady will hopefully understand that none of this was Sarah’s fault. She’s just as much as victim in all of this as Mickey’s true parents. Unfortunately, Kristen DiMera (Stacy Haiduk) may not see eye to eye with Brady on that. There could be some Sarah and Kristen feuding, which could set “Bristen” up for conflict as well.

Will Brady push for a transition period to help both Rachel and Sarah? He may take steps to make all this as easy as possible – not that it could ever be easy! Kristen, on the other hand, could hold a grudge.

That’s particularly true if Sarah makes some desperate attempt to keep Mickey at first. Sarah could back off later, but Kristen may be adamant that she’s Rachel’s mother and needs time to bond with her. This is exactly the kind of thing that could push Brady to take Sarah’s side. Could it lead to some flying sparks or at least one-sided desires on Sarah’s part?

In her fragile state, Sarah might like the idea of being a family with Brady and Rachel. Days fans will remember how upset Lani Price (Sal Stowers) was over the death of her son. It caused her to fixate on the idea of becoming a family with Rafe Hernandez (Galen Gering) and David Ridgeway (Caleb and Kyler Ends).

Lani came to her senses eventually, but it’s easy to imagine DOOL take a similar route here with Sarah, Brady and Rachel. Days of Our Lives spoilers say Sarah will be awfully miserable, so Brady may try to ease her pain. Will Sarah try to insert herself into Brady’s life? Will she still want to serve as a mother figure for Rachel?