Days of Our Lives Spoilers: Sarah Gets Alive Baby Mickey Back, Reunites with Xander – ‘Xarah’ Happily Ever After? 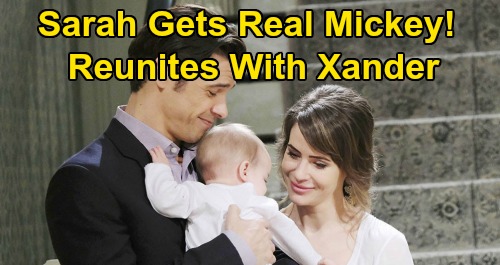 Days of Our Lives (DOOL) spoilers tease that Xander Kiriakis (Paul Telfer) will remain lost without Sarah Horton’s (Linsey Godfrey) love in his life. DOOL fans know Xander’s done some horrible things, but he managed to soften when it came to Sarah and Mackenzie “Mickey” Horton. Xander wasn’t quite as devious as he was before – although he was certainly willing to play dirty for Sarah’s sake!

However, the whole baby swap plot was done out of Xander’s great love. He truly adores Sarah, even if she can’t see that right now. Sarah’s understandably angry over the news that Xander swapped her dead baby for Rachel DiMera Black. Xander let Sarah bond with a child that wasn’t her own, so now she’s been forced to go on the run to keep Baby “Mickey.”

Of course, Xander’s suffering as well since his family just imploded. He finally had his dream woman and an adorable little girl, too. Xander posed as Sarah’s “baby daddy” for months and still felt like a dad to her – even in the aftermath of this awful switch exposure. This may be a mess Xander created, but that doesn’t mean he’s not in pain.

Since things look so bleak for Xander and Sarah right now, Days of Our Lives fans are wondering what the future holds. DOOL really struck gold with this pairing, which helped many viewers warm up to Sarah. It also made Xander a romantic hero in a way, even when he was resorting to villainous behavior.

Xander’s motives were the key – and those motives are the reason lots of Days watchers are still rooting for “Xarah.” Is there hope for these two? Could Xander and Sarah finally get their happily ever after?

Soaps are known for second chances! Forgiveness is a huge part of every Days romance, so we’d say Xander and Sarah have a shot at bliss.

There could be a major story twist in the works to speed “Xarah’s” reunion along. Part of why Sarah’s so upset is knowing her own biological child died. Sarah was never able to get to know her baby or even grieve for her. She certainly doesn’t want to give up the baby she adores, but the daughter she lost is a crucial factor.

Sarah will eventually have to give Kristen DiMera (Stacy Haiduk) and Brady Black (Eric Martsolf) their baby back, but could her own child still be alive? A third baby switch is a possibility since Orpheus (George DelHoyo) and Evan Frears aka Christian Maddox (Brock Kelly) have a secret they’re keeping from Zoey Burge (Kelly Thiebaud).

If this was just any old crime, Orpheus and Evan would tell Zoey. She’s trying to make all their legal issues go away, so they would just put it on the list of things they needed help with. Why is Orpheus so insistent on Zoey being kept in the dark?

Could it be because a baby switch went down before Xander carried out a different swap? Orpheus and Evan might’ve seen that Zoey’s baby wasn’t going to make it. That could’ve led to Zoey’s baby being switched with Sarah’s, which would’ve set up Xander’s third switch for Rachel DiMera Black.

If all that’s exposed and Sarah gets the real Mickey back from Zoey, that might be a path to happiness again. Sarah would still miss Rachel, but it’s not like the kid’s going anywhere. Rachel will be living in Salem, so Sarah can visit her and keep their connection intact.

As for her own baby, Sarah could form a new bond and raise her true child. That might help Sarah fill the void in her heart and aid the forgiveness process. “Happily ever after” only lasts so long on a soap, but perhaps Sarah and Xander can find their own version of that.