BY hellodrdavis on May 4, 2020 | Comments: Leave Comments
Related : Days of Our Lives, Soap Opera, Spoiler, Television 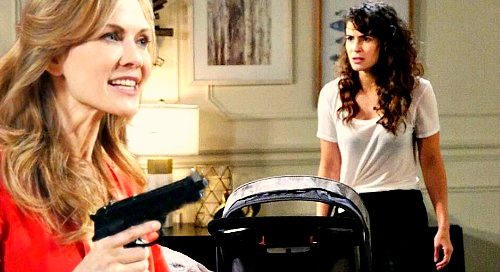 Days of Our Lives (DOOL) spoilers tease that Sarah Horton (Linsey Godfrey) is going to be in for a big surprise. As DOOL viewers know, Sarah’s got Rachel Black in Paris, and she’s just encountered Rex Brady (Kyle Lowder) in a chance meeting. Sarah thought she had gotten away from Rex successfully without him knowing that she was on the run with Rachel, but then she learned that Rex knew all about the baby switch.

Now Rex is about to call the police, and Sarah is going to have to think fast to avoid getting turned in. Well, according to DOOL spoilers, Sarah will manage to get Rex back to the apartment where she and Rachel are staying, and she’ll end up overpowering him and tying him up in the apartment.

It’s not a fool-proof solution, but at least it will buy Sarah a little bit of time while she plans her next move.

Well, while all this is going on, Kristen DiMera (Stacy Haiduk) will be getting some help from her best bud Lani Price (Sal Stowers) back in Salem. As DOOL viewers know, Kristen is responsible for the stabbing of Victor Kiriakis (John Aniston), and right now Brady Black (Eric Martsolf) is taking responsibility for the crime.

But that’s only going to last so long, and according to DOOL spoilers, Kristen will end up telling Lani that she stabbed Victor. But instead of immediately arresting her friend, Lani will help Kristen and will end up helping her track down Sarah’s location, which will presumably be in Paris.

Lani will then help Kristen to make a clean getaway from the cops, which will get Lani in trouble with Eli Grant (Lamon Archey). This means that Kristen will get away and she’ll go off in search of Sarah.

Well, according to Days of Our Lives spoilers, Kristen will ultimately track down Sarah during the week of May 11th. Kristen and Sarah will dramatically come face to face, and it looks like this will all go down in Paris.

Now, where Rachel will be during this face-to-face encounter remains to be seen, but it seems clear that Kristen and Sarah are going to have a major interaction.

What’s going to happen next remains to be seen. Will Sarah realize at that point that it’s all over and that she’s going to have to surrender Rachel to Kristen? Will we be looking at a peaceful handoff of Rachel?

Or is Sarah going to fight the inevitable and make things difficult for both herself and Kristen? Will we see a fierce mom battle here?

Perhaps actually seeing Kristen in person will be what Sarah needs in order to finally realize that Rachel has a mom and it’s not her. Whatever the case, it looks like we’re in for dramatic scenes as Sarah and Kristen meet and hash out this situation.

Stick with the NBC soap and keep CDL bookmarked for the latest Days of Our Lives spoilers, updates, and news.