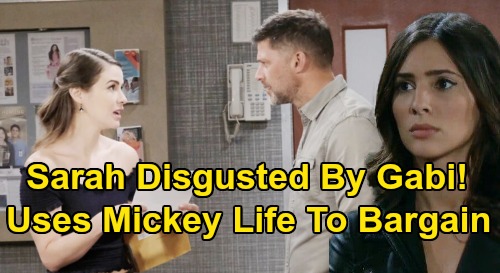 Days of Our Lives (DOOL) spoilers tease that Sarah Horton (Linsey Godfrey) will go into fierce mama bear mode soon. Since Gabi Hernandez (Camila Banus) is Mackenzie “Mickey” Horton’s bone marrow match, Sarah will make a passionate plea at the police station. Eric Brady (Greg Vaughan) will also be on hand, but Sarah will take the lead on this. She’ll want to appeal to Gabi’s maternal side in these moments.

Sarah will have mom-to-mom chat with Gabi in the interrogation room and hope she can make Gabi understand. She’ll probably argue that if Arianna Horton (Sydney Brower) were in this position, Gabi would be doing everything she could to save her. That’s what Sarah’s doing now, too. She’ll be begging Gabi to step up and rescue Mickey from a grim fate.

However, Gabi won’t be sure she wants to donate her bone marrow. She’ll put up a fight, so Sarah will fly into a rage. Days of Our Lives spoilers say Sarah will go off in a big way, so Eric may have to calm her down.

Riling Gabi up even more isn’t the best strategy, but Sarah just won’t be able to contain herself. She’s desperate to save Mickey and will be furious with Gabi for not jumping at the chance to help.

Sarah will undoubtedly feel like Gabi’s being selfish and proving she’s a horrible person. Gabi already tried to kill Julie Williams (Susan Seaforth Hayes) in front of a crowd of people. She won’t be doing any favors for her reputation by letting an innocent baby die, too.

Days spoilers say Sarah will be a total train wreck, but Gabi will eventually relent on one condition. If she’s going to save Mickey, she’ll want Sarah and Eric to work out a plea deal for her. DOOL fans can expect Sarah and Eric to eventually go along with the idea. What choice do they have if they can to keep Mickey alive?

Unfortunately, the DA won’t be so willing to see things from their perspective – at least not at first. Days of Our Lives spoilers say Eric will make a powerful pitch since the situation’s so dire. He’ll plead with the DA, who’ll reject the terms.

Nevertheless, Eric won’t give up hope. He’ll keep fighting, and we know Gabi will indeed be roaming around Salem during the week of February 24-28. It sounds like that plea deal will happen after all, so maybe Maggie Kiriakis’ (Suzanne Rogers) case will tie in with this.

After Maggie confesses to killing Adrienne Kiriakis (Judi Evans), the DA will already be looking at a huge scandal. Will Horton’s (Chandler Massey) been suffering behind bars for a crime he didn’t commit. It won’t look great if the DA’s held responsible for Mickey’s death, too. Eric could easily get The Spectator to run some article trashing the DA if need be.

Bottom line, Mickey isn’t going to die and Gabi will indeed score her freedom, so it seems things will work out in the end. Days spoilers say the excitement’s about to rev up, so don’t miss the chaos ahead. We’ll give you updates as other Days of Our Lives spoilers and news emerge. Stop by CDL often to keep up with all the hottest DOOL storylines.