Days of Our Lives Spoilers: Stefan Could Still Be Alive – Will Brandon Barash Play Both DiMera Twins? 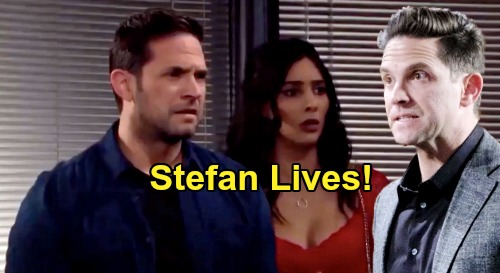 Days of Our Lives (DOOL) spoilers tease that Jake Lambert (Brandon Barash) will soon get some big news. As DOOL viewers know, Jake and Gabi DiMera (Camila Banus) recently learned that Jake’s DNA was an exact match to Stefan DiMera’s (Brandon Barash). Jake was absolutely floored, as that would mean that his entire life up to about two years ago was a total lie.

It was a lot to take in, and now Jake is going to struggle with whether he should take Dr. Wilhelm Rolf’s (William Utay) memory serum and get his memories of Stefan back.

But according to DOOL spoilers, there’s another big twist coming in this story. As soon as Jake decides to take the serum and he’s waiting for it to kick in, he and Gabi will hear from Vivian Alamain (Louise Sorel), who will instruct them to get to the police station, as her right-hand man Ivan Marais (Ivan G’Vera) will be on the scene, and he’ll have quite a story to tell.

Ivan will let Jake, Gabi, and Vivian know that Jake isn’t Stefan after all – but that he’s Stefan’s identical twin! It looks like Vivian didn’t realize that she was pregnant with twins way back when, but Ivan somehow knew and didn’t tell his “Madame” that she had another baby.

At any rate, Jake and Stefan will be identical twins, and that will explain how the DNA results came back a match.

Well, from here it seems that a whole new world will be opened up to Jake, and that he’ll have to deal with the mother he never knew and the fact that he’s both a DiMera and an Alamain.

It seems that viewers will see a full Jake storyline in which Jake comes to terms with his heredity and the aftermath of that. But what about Stefan? It looks like it may just be assumed that Stefan really died after being shot by Lani Price Grant (Sal Stowers), and that ends that.

But since this is Days of Our Lives and virtually anything is possible, there will always be the possibility that Stefan is out there somewhere alive. Think about it – Rolf hates Gabi, and he seems to delight in watching her suffer, so if he did save Stefan somehow on the sly, then he probably wouldn’t tell her.

While all of this Jake drama is going on in Salem, Stefan could be out there somewhere convalescing and slowly getting better.

We’d say there’s a pretty good chance that Stefan could turn up at some point down the line. It might take a good while for that to happen, since Camila Banus, who plays Gabi, is set to exit canvas this autumn.

Or Stefan could return someday and pair up with someone other than Gabi. And if Jake’s still on canvas, that could mean that Brandon Barash could wind up doing double duty and playing both Jake and Stefan at the same time.

We’ll see what happens here, but it would be pretty fun to watch Stefan and Jake try to interact, given that they are so very different from each other. Stefan would probably be appalled that his brother is a mechanic!

Do you think that Stefan will eventually be revealed to be alive for real? Stay tuned to Days of Our Lives and don’t forget to check back with us often for the latest DOOL news and spoilers. And check out our daily DOOL recaps as well!