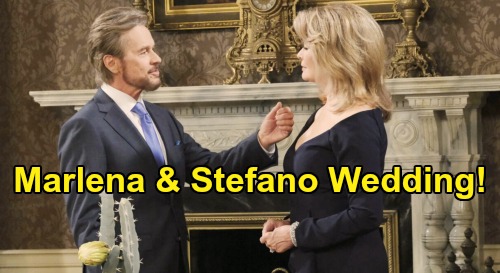 Days of Our Lives (DOOL) spoilers tease that Stefano DiMera aka Steve Johnson (Stephen Nichols) will make progress with his “Queen of the Night.” DOOL fans know Marlena underwent a transformation as part of Dr. Wilhelm Rolf’s (William Utay) creepy plan. Marlena’s supposed to be a more compliant version of herself now – a submissive Marlena who’ll cherish her bond with Stefano.

After Marlena woke up following Dr. Rolf’s procedure, she admitted she wasn’t afraid of Stefano – although she knew she should be. Stefano insisted Marlena never had to be afraid of him, but he grew frustrated when Marlena kept bringing up John Black (Drake Hogestyn).

Stefano’s worried Dr. Rolf failed him, but the wacky doc argued that Stefano would just have to be patient. Days spoilers say Stefano’s patience will pay off during the week of March 16-20.

Marlena will start to fall for Stefano, which should make him the happiest man alive. DOOL’s weekly preview video shows Marlena fainting in Stefano’s arms at one point. When she comes to, perhaps Marlena will finally be as submissive as Stefano was counting on. He’s ready to begin their bright future together.

Things will continue to go well with Marlena as Chad DiMera (Billy Flynn) carries out his father’s next orders. Days of Our Lives spoilers say Stefano will want a DiMera family reunion – and it seems he’ll have a goal in mind. He may want some guests for a big event that’s coming up, but the news of this event will certainly bring a shocker.

The week of March 23-27 will bring some stunning updates for Tony DiMera (Thaao Penghlis) and Kristen DiMera (Stacy Haiduk). Days spoilers say they’ll find out a wedding’s in the works. Stefano and Marlena are getting married!

It sounds like Marlena will probably be pretty head over heels at that point – or at least compliant enough that she’ll do just about anything Stefano suggests.

Regardless, Stefano won’t care as long as Marlena’s ready to become his beautiful bride. He’ll feel like he’s on the verge of getting exactly what he wants, but Kristen and Tony should have concerns. You can bet Stefano will ignore them, but that won’t stop Tony and Kristen from speaking their minds!