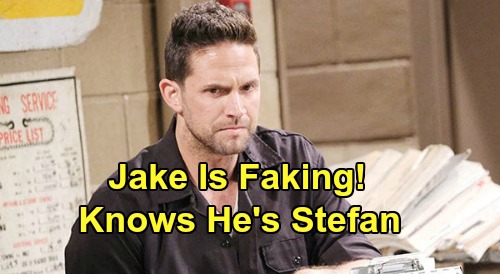 Days of Our Lives (DOOL) spoilers tease that there’s a deeper mystery behind the character of Jake Lambert (Brandon Barash). Things aren’t always as they seem on Days – and this is undoubtedly one of those times. What’s the story here? Why does Jake look EXACTLY like Stefan DiMera (Brandon Barash)?

Gabi DiMera (Camila Banus) has already been sensing Stefan’s presence. She tried to convince Will Horton (Chandler Massey) that there was surely a way to bring Stefan back to life. This is Salem! Practically everyone comes back from the dead. Despite Will’s argument, it’s tough to believe Stefan was some special case that couldn’t be saved.

Jake hasn’t revealed anything about his past yet, but he did offer up a couple clues in his chat with Ben Weston (Robert Scott Wilson). For starters, Jake revealed that he snatched up the new mechanic opening. That suggests Jake just showed up in town and explains why Gabi’s suddenly sensing that Stefan’s near.

Jake also made comments about Stefan being a dumb name and suggested the guy must be good-looking. Those seem like the kind of things the real Stefan might say if he were keeping his identity a secret. Perhaps Stefan was laying it on thick to convince Ben.

Plus, there’s absolutely no way Jake will be allowed to keep this strange blue-collar accent of his permanently. It’s cute and funny right now, but it won’t be in a few months or a year. That’s gotta go! It’s a huge indicator that Jake won’t remain Jake.

Before Ben could leave, Jake stopped him to suggest he could talk to the boss about hiring another mechanic. Jake thought he could arrange it so Ben would be working for him, which would make him Ben’s boss in a way.

Ben was cool with that, but he was also a bit suspicious. He asked why Jake was willing to stick his neck out for him. Why trust a guy Jake doesn’t even know?

Jake wondered if there was some reason he shouldn’t and assured Ben that he didn’t care about his past. If this is really Stefan, maybe he was trying to help Ben – just like he did before.

Stefan was willing to give Ben a job when no one else would. There’s also a chance Stefan’s lonely in this new life as Jake and wants someone from his past in it, even if Ben isn’t aware.

It would be a great twist if Stefan knows he’s Jake and is just putting on a show. That seems like a pretty DiMera-ish thing to do. DOOL fans know they’re born schemers, but maybe Stefan’s motives could be somewhat pure here. He may feel he’s protecting Gabi by living as someone else and letting her believe he’s dead.

Let’s consider one more clue from Brandon Barash’s recent interview with Soap Opera Digest. “The guy just wants to live a good life, but he’s making some pretty poor decisions and ending up in situations that hinder the results of his desire to live the kind of life he wants,” Barash said.

So what are these poor decisions? Moving back to be close to Gabi and trying to watch over her? Getting Ben hired at the auto garage? Those would be some possibilities if Stefan is Jake and actually knows it.

To further complicate things, Days of Our Lives spoilers say Gabi will soon be convinced that Stefan and Jake are the same person. That could be where Gabi and Stefan’s angst ultimately comes in. Jake will insist he doesn’t know who this Stefan fella is. He’ll push Gabi away, so can you imagine how furious she’ll be if it turns out Stefan was lying?

This would be much better than the typical amnesia route or even a secret twin scenario. Having Stefan lie about his identity would be a fresh take! It would also cause a major “Stabi” setback, so that’d provide an opportunity to rebuild.

We’ll give you updates as other Days news becomes available. Do you think Stefan could be pretending? Is Jake a new identity Stefan knowingly took on?