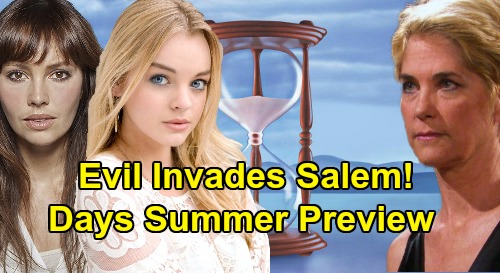 Days of Our Lives (DOOL) Summer spoilers preview teases big trouble from four characters who are set to arrive in Salem over the next few weeks, and this quad is really going to shake things up for some key players in the town. There is of course always a troublemaker or two on canvas – after all, it wouldn’t be great drama without some characters to cause havoc in the lives of others, but this summer there will be four fierce female characters who will emerge (or re-emerge) on the Salem scene.

For three of these characters, it will be a return to Salem. Here we’re talking about Claire Brady (Olivia Rose Keegan), Eve Donovan (Kassie DePaiva), and Allie Horton (previously portrayed by Carolyn and Campbell Rose).

Allie will be dramatically aged into a young adult and her portrayer has not yet been publicly announced. In addition, viewers will be introduced to Jake Lambert’s (Brandon Barash) ex-girlfriend Gwen (Emily O’Brien).

As for Claire, she’s still in Bayview for her attempts on Ciara Brady’s (Victoria Konefal) life and her destructive fire-starter ways. Claire experienced unbearable jealousy toward Ciara and was totally out of control toward the end, right before she was ultimately committed to Bayview.

Claire’s been an inpatient there for a long period of time, and it seems that she’ll feel that it’s time for her to be a free woman again.

According to Days of Our Lives spoilers, Claire will urge Marlena Evans (Deidre Hall) to help her with an early release. That might not be as easy as it seems – after all, Claire did some pretty horrific things to Ciara and she nearly burned herself to death after getting caught trying to kill Ciara in an abandoned cabin.

But eventually Claire will get her release, and she’ll be back on the Salem scene and quite interested in what her old friend Ciara is up to.

According to DOOL summer spoilers, Claire will become rather obsessed with Ciara and Ben Weston’s (Robert Scott Wilson) wedding plans, under the guise that she wants to help and to make things up to Ben and Ciara.

But Ben and Ciara will be understandably skeptical about Claire and whether she’s truly better, or whether her obsession with their nuptials is the sign of some remaining mental instability.

Viewers will remember that Claire had a special friendship with Eve, and that Eve was horrified after she realized that her actions enabled some of Claire’s destructive behavior.

Speaking of Eve, she’ll be back this summer as well, and in traditional Eve style, she’ll surely cause some major problems. Eve might start by making waves for Ciara and Ben, who will be trying to get married and live their lives in peace.

Of course, Eve probably won’t want to see Ben out living his best life when he killed her daughter Paige Larson (True O’Brien). Eve has physically attacked Ben in the past, and it’s doubtful that she’ll just stand by and let the wedding go off without a hitch.

Then again, she might bide her time and wait until after the wedding to try to destroy Ben’s happy life with Ciara. Either way, she’ll probably make her move.

Claire will also be connected to our third troublemaker, Gwen, who will not only be a patient at Bayview alongside Claire, but the ex-girlfriend of Jake. It appears that DOOL viewers will get their first glimpses of Gwen inside Bayview with Claire, just as Jake is wanting to track down his ex.

As DOOL viewers know, Jake has had some thugs after him, so he’s in some trouble, and it seems that Gwen will be connected to that dangerous drama.

Right now, it’s unknown exactly what kind of mental illness got Gwen put into Bayview, or even if Jake is aware of her history of problems.

But it sure sounds like Gwen and Claire could get themselves into some real mischief, and their friendship will likely continue once they both inevitably get released from the institution. At any rate, it doesn’t look like Gwen’s arrival will help Jake’s situation any – in fact, it could make things worse.

Finally, we have Allie, who is Sami DiMera’s (Alison Sweeney) daughter, so you know she’s going to have the capacity to cause some major drama! According to DOOL spoilers, Allie will unexpectedly show up on her Uncle Eric Brady’s (Greg Vaughan) doorstep, which will probably cause some interesting friction between Eric and Nicole Walker (Arianne Zucker).

As DOOL viewers know, Nicole is definitely not a Sami fan, so there’s a good chance that she could have similar problems with Allie.

Plus, Allie will be harboring a big secret that she asks for Eric’s help with. Exactly what this secret is remains to be seen, but it’s possible that Allie could be pregnant and unsure what to do about the pregnancy. That would certainly be a secret that Allie might want to keep from Sami and Lucas Horton (Brian Dattilo) for the time being.

And then there’s the fact that Allie has been described by TPTB as someone who’s a “mini Sami,” which means that virtually anything’s on the table for this character. And if she crosses paths with Claire, Gwen, or Eve, who knows what kind of trouble could result!

At any rate, it should be a great summer as these four ladies light up the screen and bring on the action and drama for Salem! Stay tuned to Days of Our Lives and remember that CDL is your top source for DOOL news, spoilers, and your daily DOOL recaps!