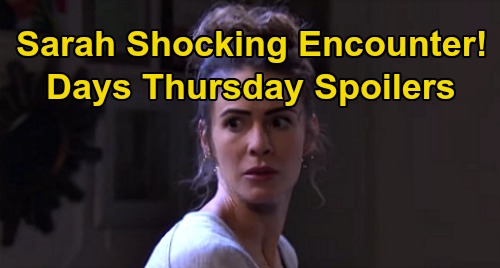 Days of Our Lives (DOOL) spoilers for Thursday, April 23, tease that Sarah Horton (Linsey Godfrey) will have a tricky encounter in Paris. She’ll talk to a woman named Jeanne Marie (Christine Kellogg Darin) as she gets settled in her new apartment with “Mickey” aka Rachel DiMera Black. Perhaps Jeanne Marie will be Sarah’s nosy landlord since too many questions could put Sarah in a tight spot!

Back in Salem, Xander Kiriakis (Paul Telfer) will face Kristen DiMera’s (Stacy Haiduk) wrath. Kristen will erupt over Xander’s lies and all the pain they caused. Kristen and Xander used to be partners in crime once upon a time, but those days are long gone.

DOOL viewers can expect Kristen to grab Xander by the shirt and grip him by the throat, so he’ll finally blurt out something to take the heat off himself.

Days spoilers say Xander will mention Victor Kiriakis’ (John Aniston) involvement in the swap, which will naturally leave Kristen fuming. Kristen will be angrier than ever as leaves Xander’s hotel room and makes a beeline for the Kiriakis mansion.

Of course, Brady Black’s (Eric Martsolf) already there. Brady’s ready to unleash his own fury, so that’s exactly what he’ll do in Thursday’s episode.

Victor will likely insist he did what he had to do to protect Maggie Kiriakis (Suzanne Rogers). He may argue that Kristen doesn’t deserve to be a mother anyway, but what about Brady?

How could Victor let his own grandson believe his child was dead? Victor may not have a good answer to that question, so he’ll just have to take whatever Brady dishes out.

Once Brady leaves, Kristen will arrive and pull out a knife. It won’t be long until Kristen stabs Victor in a fit of rage, so that should bring some explosive moments!

Days spoilers say Abigail DiMera (Kate Mansi) and Chad DiMera (Billy Flynn) are on the verge of a big win, so it sounds like Li will pick Chad and leave Gabi feeling low.

Later, Gabi will have a tense encounter with Julie Williams (Susan Seaforth Hayes), so this obviously won’t be her day! Gabi will nearly hurl a huge metal flower into the Gabi Chic window, but a shocking sight might stop her.

Days of Our Lives spoilers say Stefan’s reflection will look back at Gabi, so this will leave her feeling awfully unsettled.

In prison, it looks like Victor’s plan may go awry. Victor has people watching over Maggie behind bars, so he was hoping to pay them a little more money and make sure she stayed out of the loop.

It was bad enough that Maggie had to learned she killed Adrienne Kiriakis (Judi Evans). Victor’s worried Maggie just couldn’t handle the revelation that she killed her own granddaughter.

Alas, Julie didn’t get the memo, so she may inadvertently spill the beans when she shows up. Julie might assume Maggie needs comfort, but Maggie apparently hasn’t even heard the horrifying news yet. Will Horton (Chandler Massey) will also make an appearance at Statesville, so maybe he can console Maggie after she gets updates.