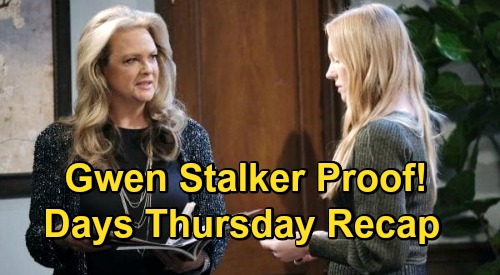 Soon, Abigail DiMera (Marci Miller) walked in, moaning about how Chad DiMera (Billy Flynn) wasn’t there and how he thought she was having an affair with Jake DiMera (Brandon Barash). That took Tony and Anna by surprise.

Abigail explained that ever since she returned from Florida, Chad has been suspicious and paranoid. Anna thought about that for a moment and said that maybe the answer was Gwen Rizczech (Emily O’Brien).

Anna said that the nanny was always trouble, and she might be out to seduce Chad. Abigail didn’t think so, but then she remembered that when she first met Gwen, Gwen was in Chad’s arms.

Anna found that very interesting, and when Abigail said that Gwen had kissed Chad, Anna was convinced that Gwen was pretending to be Abigail’s bestie while getting her hooks into Chad.

“Search her room!” Anna said, insisting that Gwen wouldn’t level with Abigail if she was confronted. Soon, Abigail and Anna headed up to Gwen’s room to snoop around.

There, Anna found a bunch of newspaper clippings about Abigail and her family hidden in a magazine, including one about Jennifer Deveraux (Cady McClain) being in a coma.

“Gwen said she didn’t know anything about my mom being in a coma when she got here,” Abigail said. “She’s stalking you,” Anna insisted, saying that Gwen could be a psycho obsessed with Abigail’s family.

Back down in the living room, Anna returned and told Tony what they found in Gwen’s room. “This is ‘Hand Rocking The Cradle’ territory all the way,” Anna said, asking Tony to admit that she was right.

Tony agreed, and he and Anna kissed happily. Meanwhile, up in Gwen’s room, Abigail tried to call Chad again, to no avail.

At the Salem Inn, Gwen pretended to think that sleeping with Chad was a bad idea. But Chad went on in his drunken state about Abigail was cheating on him with Jake, and about how Abigail got away with all these things because of her mental illness.

Chad continued to gripe about how Abigail hired Gwen so that she could have more time to have her affair with Jake, and he asked Gwen to make him forget about all of this.

Gwen pretended to be unsure, and Chad said that Gwen could get back at Jake for what he did, too. Gwen and Chad then made love, and afterwards Gwen told herself “well done” as Chad was passed out cold.

At the DiMera New Year’s Eve party, Jake told Kate DiMera (Lauren Koslow) on the terrace that he had bad news, and that Abigail knew about their affair. Kate got upset as Jake recounted how Jennifer found out that Kate met someone whose name started with a “J” at the Salem Inn.

Kate lamented that this was a disaster, and Jake fired back that Kate needed to stop worrying about what Chad thought of her. Kate whined that Chad was like a son to her, but Jake argued that Chad was an adult, and that he was proud of their relationship.

Jake accused Kate of being ashamed of him, and Kate didn’t immediately deny it, leading both Kate and Jake to start crying as they argued. Jake asked Kate to say that she wasn’t embarrassed of him, and she couldn’t.

“I knew it!” Jake fumed. Jake said that their New Year’s kiss had been their last, and he stormed off. Elsewhere at the party, Brady Black (Eric Martsolf) took off for the evening, leaving Chloe Lane (Nadia Bjorlin) with Philip Kiriakis (Jay Kenneth Johnson).

Philip stood off to the side and left a message for Ava Vitali (Tamara Braun), mentioning money laundering, which Chloe overheard.

Chloe then asked Philip what was going on with the money laundering, and Philip spilled that he had to figure out a way to launder money through Titan for the mob. Philip said that Xander Kiriakis (Paul Telfer) was making it difficult, and Chloe wondered how she could help.

Philip said that Chloe should do nothing and tell no one because he wouldn’t risk her getting hurt, or worse.

Finally, at the Horton house, Jack Deveraux (Matthew Ashford) and Jennifer canoodled on the couch. Jennifer said that she would have forgiven Jack sooner, but something Gwen said gave her pause.

Jennifer said that Gwen told her not to take Jack back, and Jack reeled, since Gwen had told him that she urged Jennifer to forgive him.

Jack and Jennifer thought there was something about Gwen that didn’t add up, but for the evening they just wanted to focus on each other and start off the New Year right. Jack and Jennifer decided to spend some time alone, and they went upstairs happily.

That was a great episode of Days of Our Lives, and there’s much more coming tomorrow, so stay tuned! We’ll keep you updated on all the latest Days of Our Lives spoilers, updates, and news. You won’t miss a thing here at CDL!