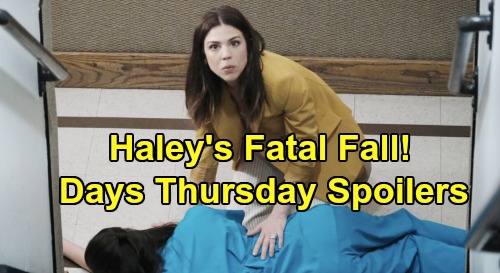 Days of Our Lives (DOOL) spoilers for Thursday, January 23, tease that Will Horton (Chandler Massey) will nearly tell Sonny Kiriakis (Freddie Smith) the truth – or at least what he believes is the truth. Will doesn’t realize drunk Maggie Kiriakis (Suzanne Rogers) caused the accident before driving her car into a nearby ditch. He was distracted by his phone, so he assumed he’s to blame for the nightmare that’s still unfolding.

Before Will can tell Sonny what he thinks happened, Justin Kiriakis (Wally Kurth) will deliver some devastating updates. He’ll tell Sonny that Adrienne is dead, so that’ll bring an emotional embrace for this father and son.

It’s Mother’s Day, so Sonny was just reflecting on how grateful he’s been to have Adrienne in his life. Finding out Adrienne’s gone forever will be a lot for Sonny to take in.

As for Will, he’ll also have to wrap his head around Adrienne’s death and the false assumption that he caused it. Days of Our Lives spoilers say Will’s going to find a confidant on Thursday.

He’ll open up to JJ Deveraux (Casey Moss), so he may admit he ran Adrienne off the road and led to her demise. That’s now how it truly went down, but Will’s going to believe that and battle awful guilt as a result.

JJ knows what it’s like to make a horrible mistake that changes everything. After JJ accidentally shot Theo Carver (Kyler Pettis), it looked like Theo wasn’t going to make it. JJ was so distraught that he decided to kill himself, but Gabi Hernandez (Camila Banus) thankfully talked him out of it.

Perhaps JJ can pass along some wisdom to Will about handling guilt. He may think Will needs to tackle what he’s done head-on. JJ’s situation was a little different, but he can understand how Will’s feeling right now.

DOOL spoilers say he’ll do his best to guide Will in the right direction, which will set up Will’s confession to Sonny and Justin by the end of the week.

In the meantime, Victor Kiriakis (John Aniston) will get more troubling news. After Xander Kiriakis (Paul Telfer) arrives with Sarah Horton (Linsey Godfrey) and her baby at the hospital, Sarah’s little girl will suddenly die. Once Xander fills Victor in, they’ll reach an agreement about what to do next.

Victor will order Xander to switch Sarah’s child for Kristen DiMera’s (Stacy Haiduk). Kristen and Brady Black (Eric Martsolf) will have a happy, healthy baby girl by then – just waiting to be swapped by Xander!

Days spoilers say Kristen will lose it when Haley Chen (Thia Megia) clams up about her kid. She’ll demand answers and follow Haley toward a staircase, where Haley will admit the baby’s dead.

The shock of it all will leave Kristen reeling, so she’ll explode and send Haley tumbling to her own death down those stairs.