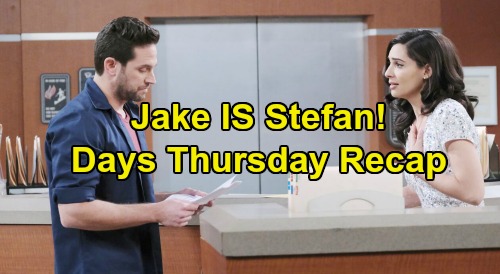 Days of Our Lives (DOOL) spoilers recap for Thursday, July 2, reveal that Sonny Kiriakis (Freddie Smith) was working at the Kiriakis mansion when Will Horton (Chandler Massey) came in and shared that Gabi DiMera (Camila Banus) had been exonerated of all charges. Will and Sonny were glad that they didn’t have to tell Ari Horton (Sydney Brower) that her mother was going back to prison, and they decided that since that was behind them, it was time to talk with Allie Horton (Lindsay Arnold) about adopting her baby.

At Eric Brady (Greg Vaughan) and Nicole Walker’s (Arianne Zucker) apartment, Allie talked with Eric about her pregnancy and her plan to ask Rafe Hernandez (Galen Gering) to adopt her baby.

Eric cautioned Allie gently about being 100% sure before talking with Rafe, and Allie said that she was sure – she just didn’t want to raise a baby at this point in her life. Allie took off to go find Rafe.

At the Salem Inn, Ciara Brady (Victoria Konefal) lamented to Ben Weston (Robert Scott Wilson) about her ruined wedding dress that someone spilled nail polish all over.

Ben thought that Claire Brady (Olivia Rose Keegan) had done it, but Ciara found that hard to believe, given the good time that she and Claire had earlier. Ben and Ciara decided to head over to the penthouse to ask Claire about it.

At Marlena Evans (Deidre Hall) and John Black’s (Drake Hogestyn) penthouse, Claire was polishing her nails when Gwen (Emily O’Brien) came in. After some talk about Gabi being acquitted, Gwen asked how things went today with Ciara.

Claire said that she and Ciara had a great time dress shopping. Gwen pressed Claire to see if she had ulterior motives where Ciara was concerned.

Before Claire could answer, Ben and Ciara stopped by the penthouse and Ciara told Claire about what happened to her wedding gown. Claire denied ruining the gown, saying that she hadn’t even taken the gown out of the bag when she returned it. Ben then noticed nail polish sitting around the townhouse and thought that was very interesting.

Claire pushed back, but Ben didn’t buy Claire’s innocent act. Gwen then got involved, defending Claire and needling Ben about whether he was going to strangle her.

Claire broke up the argument, insisting that she didn’t do anything to Ciara’s dress. Ciara said that she believed Claire and that Claire could still be her maid of honor. Claire then offered to pay for the dress that was ruined, which Ben found suspicious.

Ben and Ciara took off, and Gwen wanted to know whether Claire ruined the dress. Claire said, “Of course not.” Ben and Ciara returned to the Salem Inn, where Ben refrained from saying, “I told you so,” and simply told Ciara that no matter what she wears to the wedding, she’ll be the most beautiful bride he’s ever seen.

At the hospital, Gabi and Jake Lambert (Brandon Barash) bickered as Gabi tried to read the DNA test results. Finally, Gabi stated that the results were a 100% match, and that Jake was Stefan DiMera (Brandon Barash).

Gabi got emotional and kissed Jake, and Jake got peeved as he realized that the past two years of memories are the only real memories he’s got.

Gabi told Jake that Wilhelm Rolf (William Utay) was good at planting false memories, and that she can fix this. Jake protested that even though the results are in, he still doesn’t remember Gabi, and Gabi said that it wasn’t his fault. “I know a way to help you remember,” Gabi said, as she took his hand and led him onto the elevator.

At the police station, Rafe showed Vivian Alamain (Louise Sorel) a mugshot of Jake. Vivian reeled as Rafe said it was a picture of Jake, whom Gabi thinks is Stefan.

Rafe said that the DNA tests were forthcoming, and Vivian got emotional. Rafe stepped out to do paperwork, and Gabi and Jake walked in the squad room. Gabi told Rafe that Jake was Stefan. Rafe was floored.

Rafe then shared that Vivian was in the interrogation room. Jake didn’t know who that was, so Gabi and Rafe explained that it was his mother. Gabi thought that Jake should go talk to Vivian alone, perhaps to jog his memory.

Jake was horrified to learn that Vivian had just tried to kill someone, and that she had buried Kate DiMera (Lauren Koslow) alive. Still, he decided to go talk to Vivian.

Allie then walked into the squad room and asked for a moment with Rafe. Allie and Rafe took off. Jake went into the interrogation room and Vivian reeled. “Stefan, you’re alive!” Vivian exclaimed. “My son!” Jake looked unnerved.

Finally, in town square, Rafe and Allie sat at the café and Allie told Rafe that he was a great stepdad and that she was grateful for their talk the other day. Allie said that it was unfair for the judge to make David Ridgeway (Kyler Ends) go away, and that she had something to help make Rafe ok again. “Do you want to adopt my baby?” Allie said. Rafe looked stunned.

There’s definitely a lot going on right now on Days of Our Lives, so stay tuned! We’ll give you updates as more DOOL news comes in. Stick with the NBC soap and don’t forget to keep CDL bookmarked for the latest Days of Our Lives daily recaps, news, and spoilers.