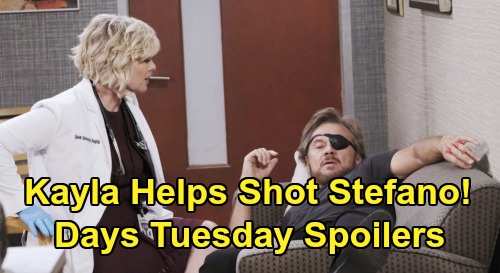 Days of Our Lives (DOOL) spoilers for Tuesday, February 11, tease that we’ll see the aftermath of a fierce faceoff. Stefano DiMera aka “Steve Johnson” and Chad DiMera (Billy Flynn) just struggled over a gun before a shot rang out. When they step apart on Tuesday, DOOL fans will see that Stefano has taken a bullet.

However, Stefano won’t let that stop him from making a quick getaway. He’ll lock Chad and Abigail DiMera (Kate Mansi) in the lair – presumably with Hattie Adams (Deidre Hall).

While they try to find a way out, Days of Our Lives spoilers say Stefano will track down Kayla Brady (Mary Beth Evans). “Steve” will insist that Stefano lost control and is now on a violent rampage, so Kayla will agree to help him.

Of course, Kayla won’t realize “Steve” IS Stefano – at least in a version of him. After Kayla removes the bullet, “Steve” will convince her that he can’t stay at the hospital. He’ll want to escape undetected and hide out somewhere else for a while.

Despite Kayla’s anger over “Steve’s” actions, she won’t be able to turn her back on him. Days spoilers say Kayla will put a plot in motion to smuggle Steve out, which could bring a close call or two.

In the meantime, Jennifer Deveraux (Melissa Reeves) will face a memory flood. She’ll reflect on the night she was pushed off the bistro balcony and suddenly remember who was behind it.

Rafe may succeed in saving Marlena, but it looks like Princess Gina will indeed outmaneuver Rafe for now. Shawn Brady (Brandon Beemer) will get his chance to confront Princess Gina and try to bring his mom to the surface later this week.