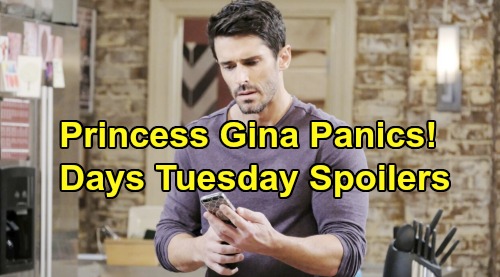 Days of Our Lives (DOOL) spoilers for Tuesday, January 28, tease that Lani Price (Sal Stowers) will get some huge news. She’ll be on an emotional roller coaster when she finds out Eli Grant (Lamon Archey) and Gabi Hernandez (Camila Banus) are now engaged. Lani will have to deal with plenty of heartbreak, regrets and jealousy, but rage should be what she feels most thanks to Gabi’s twisted scheme.

Once she gets updates on Gabi and Eli’s engagement, it should leave Lani even more determined to take down her rival. Days of Our Lives spoilers say Lani won’t let Gabi get away with her evil actions. She’ll keep working on a plan to take back her own happiness and make Gabi pay the price.

Meanwhile, Princess Gina Von Amberg aka “Hope Brady” (Kristian Alfonso) will be unsettled over Shawn Brady’s (Brandon Beemer) return to town. Shawn’s figured out the truth about Princess Gina before, so she’ll naturally be worried he could do it again.

Nevertheless, Princess Gina has a plot in motion, which could leave her a bit distracted from all the Shawn drama.

At the Salem PD, Shawn will hear about “Hope’s” smoking, evidence blunders and moves on John Black (Drake Hogestyn). He’ll also learn that “Hope’s” been lashing out and seemingly keeping secrets.

Days spoilers say it’ll quickly dawn on Shawn that this isn’t his mother. He’ll tell Rafe it has to be Princess Gina and assume Dr. Wilhelm Rolf (William Utay) must’ve done something to transform “Hope.”

When they realize Marlena is missing later this week, Shawn and Rafe will definitely fear for her safety. DOOL fans know Princess Gina can be awfully dangerous when she wants to be!

In Europe, John and “Steve Johnson” aka Stefano DiMera (Stephen Nichols) will follow a phony trail. There’s no need for this Stefano hunt since Stefano’s right there, but John will remain in the dark on that for now.

Days of Our Lives spoilers say Anna DiMera (Leann Hunley) and Tony DiMera (Thaao Penghlis) will cross paths with John and “Steve” on their mission. Anna will drag Stefano’s name through the mud, so “Steve’s” fierce outburst is coming up. He’ll eventually shut down Anna’s nasty Stefano comments – and the rest of the gang is bound to wonder why.

It sounds like some great scenes are on the way. We’ll keep you posted as other Days details emerge. Stay tuned to DOOL and don’t forget to check CDL often for the latest Days of Our Lives spoilers, updates and news.