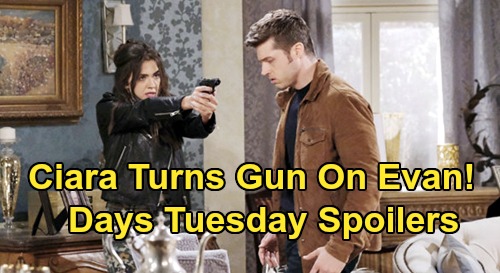 Days of Our Lives (DOOL) spoilers for Tuesday, March 3, tease that Xander Kiriakis (Paul Telfer) will find himself in a panic. He’ll bump into someone he hoped he’d never see again, so he’ll worry big trouble’s brewing! The baby switch secret will once again be at risk.

DOOL fans know Dr. Raynor (Victoria Platt) was in the loop on the baby swap, but Victor Kiriakis (John Aniston) paid her to keep quiet and go away. However, plans will change when Dr. Raynor shows up out of the blue.

Days of Our Lives spoilers say Xander will freak after he spots the doc back in town. It won’t be long until Xander confronts Dr. Raynor and demands to know what she thinks she’s doing.

Whether Dr. Raynor wants more money or is facing a crisis of conscience, Xander will know her return isn’t good news. While Xander and Dr. Raynor argue, Kristen DiMera (Stacy Haiduk) will have an argument of her own with Gabi Hernandez (Camila Banus).

Days spoilers say Kristen will blast Gabi over the pain she caused Lani Price (Sal Stowers) and the sneaky way she got off the hook for her crimes.

Gabi was only willing to be Mackenzie “Mickey” Horton’s bone marrow donor if she scored her freedom, so Kristen will find that appalling. Little does Kristen know her own baby was the one used as leverage!

At Statesville, the lethal injection process will begin for Ben Weston (Robert Scott Wilson). He’ll hate that it had to end like this, but he’ll try to focus on something positive.

Ben finally found love and acceptance with Ciara Brady (Victoria Konefal), so he’ll be grateful for the short time they had together. Days spoilers and updates say Ben will have some memory flashes in Tuesday’s episode. He’ll think back on significant moments throughout his relationship with Ciara, so this should bring some nice scenes for “Cin” fans.

However, Ciara’s still fighting hard to stop this execution before it’s too late. Days of Our Lives spoilers say Ciara will wrestle Evan Frears aka Christian Maddox’s (Brock Kelly) gun away from him.

She’ll force Evan to head back to the prison with her for a full confession. Ciara won’t rest until Evan takes responsibility for killing Jordan Ridgeway (Chrishell Stause) and clears Ben’s name!

It sounds like some shockers are coming up on the NBC soap. As we hear more DOOL news, we’ll pass along plenty of updates. Stop by CDL often for exciting Days Our Lives spoilers and all the latest details.