Days of Our Lives Spoilers: Tuesday, May 19 Recap – Maggie Learns She Didn’t Kill Anyone – Orpheus Flips The Script

BY hellodrdavis on May 19, 2020 | Comments: Leave Comments
Related : Days of Our Lives, Soap Opera, Spoiler, Television 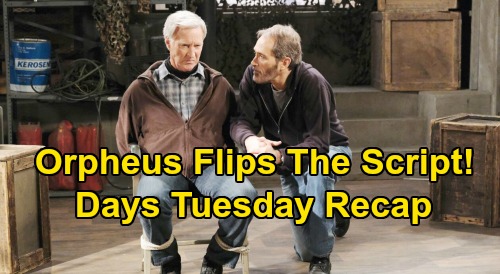 Days of Our Lives (DOOL) spoilers recap for Tuesday, May 19, reveal that Rafe Hernandez (Galen Gering) refused to untie Zoey Burge (Alyshia Ochse), arguing that she might have been in on Orpheus’ (George DelHoyo) kidnapping of David Ridgeway (Kyler Ends). Zoey insisted that she was on Rafe’s side in this, and eventually Rafe untied her. Zoey remembered that Orpheus said he was taking David to meet an old friend, and Rafe surmised that it must be John Black (Drake Hogestyn).

Meanwhile, at some warehouse, Orpheus talked sweetly to David, while John was tied up and gagged in a chair nearby. Orpheus briefly un-gagged John, who spoke to David nicely. Orpheus told John to stay calm, and he said that Marlena Evans (Deidre Hall) was going to give him $10M to run off with David. John insisted that Orpheus leave Marlena out of this, and later John tried to coax David to hand him his phone, but Orpheus intervened.

At the Brady Pub, Hope Brady (Kristian Alfonso) sat with Steve Johnson (Stephen Nichols). Steve said that he heard that Ciara Brady (Victoria Konefal) was engaged to Ben Weston (Robert Scott Wilson), and Hope said she was coping with it. Marlena then called and asked Steve to come over to her penthouse right away, and to bring Hope with him. Once at the penthouse, Marlena briefed Hope and Steve about John’s kidnapping and Orpheus’ demands.

Hope said that Rafe needed to be brought in, and Marlena said that she talked with him. Steve said he wanted to talk with Shane Donovan (Charles Shaughnessy), and he went off to call Shane while Rafe and Zoey arrived. Zoey remembered Marlena from back when Orpheus forced Marlena to care for her and Evan Frears aka Christian Maddox (Brock Kelly), and she promised to help bring John and David home safely.

Hope spoke privately with Rafe, apologizing for the horrible things she said to him when she was Princess Gina Von Amberg (Kristian Alfonso). Rafe accepted her apology. Soon, Steve returned, and Orpheus called Marlena. Marlena put Orpheus on speaker phone, and he quickly surmised who was in the room. Orpheus called out Steve, Hope, and Rafe for being there, and Zoey made her presence known on the call as well.

Orpheus enjoyed toying with the group, and he told Marlena that the deal had changed – he now wanted $15M and he’d “maybe” call tomorrow. Orpheus let John talk for a brief moment, and John confirmed that he and David were alive and well and told Marlena not to meet Orpheus’ demands. Orpheus said that everything was subject to change, and that if Marlena disappointed him, she’d never see John again.

At the hospital, Victor Kiriakis (John Aniston) tried to reach Xander Kiriakis (Paul Telfer) to no avail. Sonny Kiriakis (Freddie Smith) and Will Horton (Chandler Massey) walked in and soon learned about Maggie Kiriakis’ (Suzanne Rogers) suicide letter. Will raced to the prison, hoping he could talk his way in to see what was going on, and to see if Xander found Maggie in time.

Will bumped into Justin Kiriakis (Wally Kurth) and Kayla Brady (Mary Beth Evans) at the nurses’ station and told them about Maggie’s suicide letter. Will and Kayla rushed off to the prison together. Justin went into Victor’s room and, with Sonny, tried to calm Victor down.

Over at the prison, Xander struggled to get Maggie detangled from the noose that was tied to her bed. Xander yelled for help and performed CPR on Maggie, and finally Maggie was revived. Later, Maggie woke up in the infirmary with Xander at her side. Maggie blasted Xander for saving her life, and after struggling to get Maggie to listen, he finally told her that she didn’t kill anyone last Mother’s Day.

Maggie didn’t understand what Xander was trying to say, and Will and Kayla walked in and interrupted. Xander again said that Maggie didn’t kill anyone, and they proceeded to rehash all the details about how Summer Townsend (Marie Wilson) visited that night and upset Maggie to the point where she wanted to drink.

Xander explained the whole story about how Maggie didn’t drink, but instead got chloroformed by Orpheus and Evan, then the accident happened, and then Orpheus and Evan placed Maggie in the driver’s seat of the car with a vodka bottle. Maggie was thankful and very emotional about this revelation, and Xander explained that Orpheus’ daughter revealed what had really happened that night.

Maggie wanted to know if Sarah Horton (Linsey Godfrey) knew the truth yet, but Xander said that she didn’t. Maggie said that she owed Xander so much, and that he had taken away the guilt that had been weighing down her soul. “How do I ever thank you?” Maggie said.

Soon, Kayla returned and said that Maggie would be just fine. Victor quipped, “Until she tries it again the next time,” but Kayla said that Maggie wouldn’t, because she didn’t cause the deaths of Adrienne Kiriakis (Judi Evans) or Sarah’s baby. Kayla then rehashed the whole story, explaining about the chloroforming and how someone else was driving Maggie’s car that night.

That was a terrific episode of Days of Our Lives, and there’s more coming this week, so be sure to stay tuned. Here at CDL, we’ve got all your DOOL news and spoilers, so come back often for all your updates!