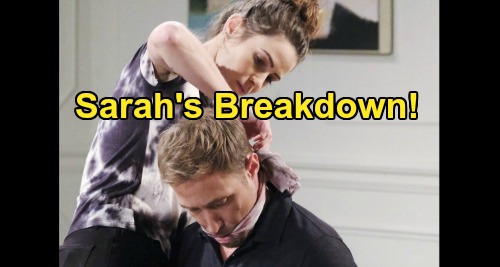 Days of Our Lives (DOOL) spoilers update for Tuesday, May 5, teases that Eli Grant (Lamon Archey) will grow suspicious. Kristen DiMera (Stacy Haiduk) begged Lani Price (Sal Stowers) for help, so Lani ultimately caved in. Lani’s been busy arranging Kristen’s escape, so she should be on edge when she reconvenes with Eli.

Lani and Eli obviously know each other pretty well by now. It won’t take long for Eli to assume something’s up, so Lani should find herself on the hotseat soon enough. However, it looks like Lani will manage to dance around the truth. It won’t be until later this week that Lani spills all and leaves Eli fuming.

In the meantime, Days of Our Lives spoilers say there’ll be more Paris mayhem. Sarah Horton (Linsey Godfrey) whacked Rex Brady (Kyle Lowder) in the head and left him unconscious on the floor, so the stakes have been raised. Since Sarah can’t just leave Rex there, she’ll strap him to a chair and put a gag in his mouth.

Sarah’s determined to keep Mackenzie “Mickey” Horton by any means necessary, but Rex will think she’s out of control! Once Rex awakens and convinces Sarah to take the gag out, he’ll insist she has to give Rachel DiMera Black back. Sarah’s worried about Kristen serving as Rachel’s sole parent, but Sarah doesn’t have the whole story just yet.

Rex is due at work soon, so he’ll point that out to Sarah, too. Someone’s bound to notice and come looking for Rex, so the walls will start closing in. Sarah will break down in tears as she goes on another rant about her pain.

As if it wasn’t bad enough that Sarah’s bio daughter died, Maggie Kiriakis (Suzanne Rogers) is the one who killed her – at least that’s where the story stands now.

Sarah will begin to confide the depths of her pain, which should lead to her settling down and untying Rex later this week. Until then, Maggie will experience total devastation. She didn’t think she could feel any worse about that Mother’s Day car crash, but Xander Kiriakis’ (Paul Telfer) news will indeed add to Maggie’s sorrow.

Days of Our Lives spoilers say Xander will visit Maggie in prison and reveal the baby switch shocker. It’ll be a difficult blow for Maggie, who’ll be both shattered and furious. Xander will get a hard slap before this conversation’s over, so stay tuned.

In the park, Eric Brady (Greg Vaughan) will enjoy picnic with his two favorite girls. Nicole Walker (Arianne Zucker) will hope to lift Eric’s spirits – and this outing with Holly Jonas will definitely do the trick.

Days spoilers say Eric will be on cloud nine for the first time in a while. Eric was heartbroken over losing Mickey – both the real one and Rachel, who he believed was Mickey for months.

Fortunately, Eric will put all that drama out of his mind on Tuesday’s DOOL episode. He’ll realize he’s still got a daughter in Holly, who’ll call Eric “Daddy” and express her love. Eric will be stunned as he exchanges a look with a deeply moved Nicole.

Since Eric’s the only real father figure Holly’s ever had, he should accept this “Daddy’ moniker with pride. Eric is Holly’s dad in every way that counts.

We’ll deliver more DOOL updates as they come in. Days spoilers say Nicole and Eric’s wedding is coming up down the road, so that’s something to look forward to! CDL’s the place to be for hot Days of Our Lives spoilers, updates and news.