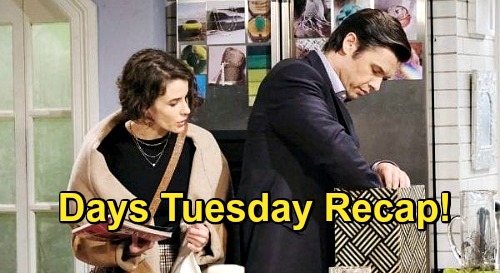 Once Ava left the apartment, Xander and Sarah broke in and snooped around, finding a visitor’s badge from the prison under the name Angela Vandekamp. After a while, Ava returned and Sarah and Xander escaped from the apartment without seeing Ava.

When Xander called a buddy at the prison, he learned that Angela Vandekamp had been to see Kristen DiMera (Stacy Haiduk).

Maggie comforted Philip and fished for information about why Philip hated Xander so much, but Philip wouldn’t spill what was really going on at Titan Industries and his partnership with Ava. Eventually, Philip decided to retire, and when he got upstairs, he found Belle in his bed.

Jan said that if Brady alerted the cops, then Belle would die. Claire Brady (Isabel Durant) stepped up and told Jan that Shawn didn’t love her. Jan quipped that Shawn could learn to love her. Jan demanded that John and Marlena fork over their rings for use in the ceremony.

Over at the Salem Inn, Eli Grant (Lamon Archey) and Brady burst into Belle’s suite and found the room a mess but no sign of Belle. Eli and Brady headed back to the penthouse to find out from Jan where Belle was. 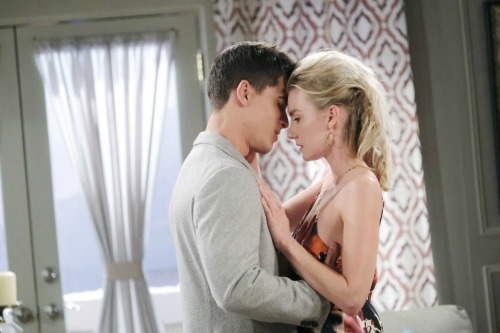 Back at the penthouse, the wedding ceremony continued, with Marlena finally pronouncing Shawn and Jan husband and wife. Just then, Brady and Eli burst in, and Jan was horrified but she declared that she had already shot Belle and disposed of her body.

John couldn’t take it, and in anger he grabbed Jan and started choking her violently. Eventually, Brady and Shawn pried John off of Jan, who was now unconscious.

Eli called for an ambulance and announced that he had to take John into the station for assaulting Jan. John was horrified by what he did, but Eli insisted that he had to be taken in. Marlena tended to Jan, saying that she’d let John know as soon as she learned anything about Jan’s condition.

Back at the Kiriakis mansion, Belle woke up to Philip calling her name. Belle came to and quickly realized that she had been drugged by Jan. Philip comforted Belle, telling her that she’s safe now.

Shawn headed over to the Salem Inn, where he found a letter from Belle on the floor – it was clearly a letter that Belle had written to Shawn on their wedding day and he read it out loud, getting emotional toward the end.

Soon, Eli walked in, and he suggested that Jan might have had an accomplice. Shawn immediately thought that the accomplice could be Philip. Eli and Shawn took off for the Kiriakis mansion.

Meanwhile, back at the penthouse, Claire was beside herself with worry over her mom. Charlie comforted Claire, who felt that the whole thing was her fault for telling Jan where Belle was.

Charlie said that it wasn’t Claire’s fault, and that she could lean on him. Charlie and Claire hugged tenderly.

At the Kiriakis mansion, Belle rehashed her whole ordeal with Jan, then she said that they needed to call Marlena over at the penthouse and make sure everyone’s ok. Downstairs, Shawn and Eli arrived and blew past Maggie.

Shawn raced upstairs and found Philip with Belle, immediately accusing Philip of conspiring with Jan. Belle quickly told Shawn that it was all Jan and that Philip was innocent.

Shawn and Belle called Marlena and John, and then Shawn told Belle about John trying to strangle Jan.

Back at the penthouse, Claire got a text from Shawn saying that her mom was alive, and she was greatly relieved. Claire apologized to Charlie for dragging him to the wedding, but Charlie said that he was glad he could be there for Belle.

“I’m glad I was here – I could have protected you,” Charlie said. Claire was touched, and she and Charlie kissed happily.

At the Salem PD, Brady and John entered the interrogation room, and John lamented about how this blind rage came over him and he couldn’t stop strangling Jan.

Soon, Brady got a text from Shawn about Belle being ok, and the men were overjoyed. Marlena then entered the room, and John asked what happened at the hospital and whether Jan was ok. Marlena looked somber.

That was a great episode of Days of Our Lives, and there’s much more coming tomorrow, so stay tuned! Stick with the NBC soap and don’t forget to check CDL regularly for the latest Days of Our Lives spoilers, daily episode recaps, and news. We’re your go-to source for all the soaps!