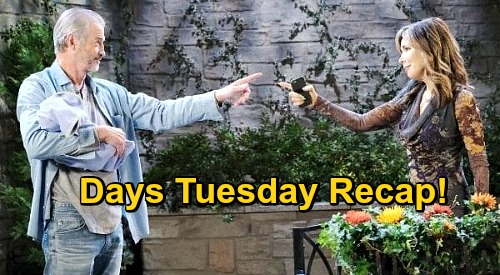 Lucas had the unpleasant task of telling his mother about Allie Horton’s (Lindsay Arnold) rape. Kate was horrified to hear the news, and Lucas broke down, blaming himself for not being there for Allie in London and having prevented the situation in the first place.

Kate then learned that Henry Horton (Kinsley and Jayna Fox) was the product of Allie’s rape, and she was even more distraught, but that soon turned to anger when she learned that Allie’s rapist was Tripp Dalton (Lucas Adams).

At Bayview, Marlena Evans (Deidre Hall) spoke to a doctor on staff about getting Evan Frears aka Christian Maddox (Brock Kelly) transferred to another facility, with the goal being to deliver him to Orpheus (George DelHoyo).

The doctor balked, but Marlena pulled rank and threatened to get the doctor fired if he didn’t comply immediately. Eventually, the doctor agreed and went to get Evan.

However, when Evan arrived to greet Marlena, he refused to go with her. Marlena urged him to come with her to be transferred, but he sensed that something was up since Marlena was agitated and since she wouldn’t tell him where he was being taken.

Eventually, Marlena said that she had been talking with Orpheus, who wanted Evan transferred. Evan refused to have anything to do with his father ever.

In the park, Clyde Weston (James Read) held Henry and remarked that he might have to ditch the baby and go check on Ben Weston (Robert Scott Wilson). Henry started fussing, and Clyde called Orpheus to see what was going on, but Orpheus didn’t answer.

At the warehouse, John Black (Drake Hogestyn) held a very calm Orpheus at gunpoint. Orpheus told John to put the gun down and that Henry had been kidnapped.

Orpheus said that his associate was standing by and waiting for his instructions. John continued to hold Orpheus at gunpoint, not sure what to believe.

At Nicole Brady’s (Arianne Zucker) apartment, Nicole and Allie reeled from their discovery that Henry was gone. Allie concluded that the repair guy must have taken Henry.

Allie then got a call from John, who was still holding Orpheus at gunpoint. John learned from Allie that Henry had been kidnapped, and he told Allie calmly that everything was going to be ok and that they’d find Henry soon.

John hung up with Allie and asked Orpheus where Henry was. Orpheus would only say that Henry was safe. Orpheus then disclosed his plan to use the baby as insurance to make sure that Marlena got Evan out of Bayview.

John told Orpheus to call his associate and tell him to return the baby or else his boss was a dead man. Orpheus said that if anything happened to him, the baby wouldn’t make it. John reluctantly handed over his gun to Orpheus.

Back at Nicole’s apartment, Lani Price-Grant (Sal Stowers) showed up and learned about what happened with the repairman and about Henry going missing. Lani showed Allie pictures of the escaped prisoners, and Allie positively identified Clyde as the perp who took Henry.

Back in the park, Clyde continued to hold Henry, and he remembered promising to check on Ben in the morning. Clyde talked to the baby about Ben as he drank booze, and he told Henry that maybe Henry could help Ben out.

At the Salem Inn, Ben got a visit from Eli Grant (Lamon Archey) and once again denied having seen Clyde that evening. Eli wanted to search the place, and Ben scoffed, then agreed. Eli almost opened the drawer where Ben hid his gun, and Ben stopped him, prompting Eli to say that Ben was acting suspicious.

Eli got a call from Lani saying that Allie’s baby was kidnapped by Clyde, and Ben overheard. Ben was horrified, and Eli turned on Ben, asking how he could have lied to protect his father.

Ben was seriously disturbed and remembered that Henry was Marlena’s great-grandson. Ben told Eli that Clyde had been there earlier, and Eli was furious with Ben, saying that he was taking him down to the station for the time being.

Back at Nicole’s apartment, Lani hung up with Eli, as Allie started to blame herself for what happened to Henry. Allie went on, saying that Henry’s kidnapping was her punishment for being a horrible mother.

Nicole insisted that wasn’t the case, and she pointed out the ways in which Allie had been a loving, good mother to Henry. Lani told Allie and Nicole that they’d find Henry, and Allie said that’s exactly what Grandpa John had said.

Finally, in the park, Clyde kept talking to Henry, saying that perhaps having a baby would make life worth living to Ben. Suddenly, Kate came along and came face to face with Clyde and Henry.

There’s definitely a lot going on right now on Days of Our Lives, so stay tuned! We’ll give you updates as more DOOL news comes in. Stick with the NBC soap and remember that CDL is your go-to place for all your soap updates. We’ve got all the latest soap spoilers and hot news!