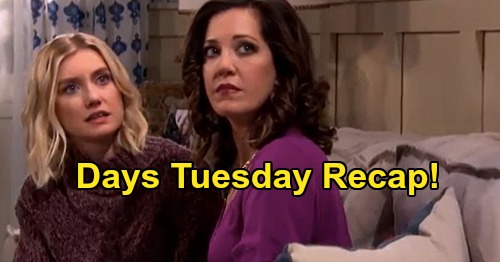 Days of Our Lives (DOOL) spoilers recap for Tuesday, September 15, reveal that Hope Brady (Kristian Alfonso) gazed at a picture of Ciara Weston (Victoria Konefal) outside of Julie’s Place. Hope started sobbing, and Abe Carver (James Reynolds) found her and comforted her.

Hope said that she had just been with Doug Williams (Bill Hayes) and Julie Williams (Susan Seaforth Hayes), and Abe suggested that Hope take some time off as interim police commissioner. Hope refused, saying she was going to find Vincent Belman (Michael Teh) and make him pay.

Meanwhile, at the hospital, Brady Black (Eric Martsolf) learned via phone from Kristen DiMera (Stacy Haiduk) that she had been arrested. Brady was horrified, and as soon as he hung up, Belle Black (Martha Madison) walked up.

Brady asked Belle to be Kristen’s lawyer, and Belle said that the first rule was that Kristen should not say one word to the cops.

Jan said that she was a friend of Belle and Shawn’s and that she wanted to get to know Claire. Claire initially refused, but then she asked Jan to stay and talk.

Jan lent an ear to Claire, as Claire recounted her history and how she had tried to hurt Ciara. Claire found that Jan was easy to talk to, and Jan helped Claire to process some of her feelings about Ciara.

Claire related with Jan when Jan confessed that she used to have obsessive thoughts that took over her life. Jan and Claire hugged, and just then Belle walked in and told Jan to get away from her daughter.

At the police station, Lani Price-Grant (Sal Stowers) fumed at Eli Grant (Lamon Archey) for arresting Kristen. Lani made a parallel to Kristen being kept from her daughter and the loss of David Abraham, but Eli wasn’t having it. Lani couldn’t stand to talk to Eli anymore, and she left to go get Rachel Black from the aide who was watching her.

Soon, Brady walked in, and Eli said that she was in the interrogation room. Brady went in and hugged Kristen. Kristen was apologetic for coming back to Salem and getting arrested, and she told Brady the story about how Eli arrested her and went behind Lani’s back.

After some talk about how they were going to get Kristen out of this mess, Brady said that he had an idea.

Back in the squad room, Hope rushed in and asked Eli if there was any news on the hunt for Vincent. Eli soon got a call about a possible sighting of a man on a bus leaving Salem, and soon Shawn arrived with the forensics report from the car explosion.

Hope grabbed the report and looked, then she said she didn’t believe it – there were no remains found in the car.

Hope thought that Ciara might have escaped somehow, and the more she, Shawn, and Eli thought about it, the more hope they had that Ciara could be alive.

Hope and Shawn took off, and when Shawn caught up with Hope in the park, Hope said that she’d never give up until she found out what really happened to Ciara.

At Julie’s Place, Abe was dining when Lani came along with Rachel. Lani told Abe the whole story about Eli arresting Kristen behind her back, and Abe urged Lani to go talk with Eli. Lani seemed peeved that Abe was taking Eli’s side, but Abe said he wasn’t on a side.

Lani left Rachel with Abe while Lani went back to the police station.

Once at the station, Lani went immediately into see Kristen, bypassing Eli in the squad room. Lani and Kristen talked, and Lani apologized for what had happened. Lani promised that she was going to make this right.

At the Kiriakis mansion, Maggie Kiriakis (Suzanne Rogers) walked in as Victor Kiriakis (John Aniston) was sitting in the living room loading a handgun. Maggie wondered what Victor was doing, and he said that he was going to go kill Ben Weston (Robert Scott Wilson) at the hospital.

Maggie talked Victor down and encouraged him to open up and grieve over Ciara, rather than take out his anger on Ben.

Victor and Maggie talked about what a wonderful person Ciara was, and Victor finally let go and expressed his grief and sorrow over Ciara’s death. Maggie put the gun back in the safe, and Brady walked in.

After talking about John Black’s (Drake Hogestyn) recovery and Ciara’s death a bit, Brady said he was there because Kristen had been arrested. “I need your help to save her,” Brady told his grandfather.

That was a fantastic episode of Days of Our Lives, and there’s plenty more coming tomorrow, so be sure to tune in. Remember, we’re your go-to source for everything soap related, so keep checking back with CDL for all your Days of Our Lives spoilers, daily episode recaps, and news.