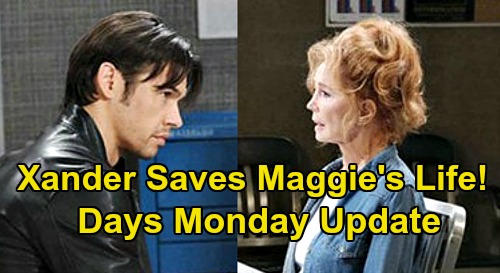 Days of Our Lives (DOOL) spoilers for Monday, May 18, tease that Sarah Horton (Linsey Godfrey) and Brady Black (Eric Martsolf) will decide to be miserable together. Due to the baby switch exposure and everything that came after it, Sarah and Brady have lost everything. DOOL fans know Sarah was set to marry Xander Kiriakis (Paul Telfer) and happily raise Mackenzie “Mickey” Horton before the truth came out.

Sarah was done with Xander once she found out about his role in the baby swap. After the kidnapping fiasco, Sarah ultimately gave Kristen DiMera (Stacy Haiduk) her daughter back. Now Sarah finds herself partner-less and childless.

Brady’s in the same situation since Kristen was forced to go on the run with Rachel Black, so he’ll be able to relate to Sarah as they drink at the pub.

Sarah may panic a bit more over Kristen raising Rachel on her own, but Brady can counter that Kristen loves her little girl more than anything. Kristen’s violent wrath is reserved for her foes, not her baby.

Sarah will eventually let it go and just focus on tossing back some booze. She’ll try to drown her sorrows with Brady before a vengeful scheme takes shape.

Days of Our Lives spoilers say Brady and Sarah will want a little payback for all their pain. They’ll want Victor Kiriakis (John Aniston) to suffer along with Xander, so Sarah will suggest a toast to sweet revenge.

Brady will clink his glass with Sarah and suggest that he’s on the same page. It won’t be long until Sarah and Brady put the first phase of their plot in motion.

Other Days spoilers say Xander will get some troubling updates about Maggie Kiriakis (Suzanne Rogers). Victor just got a letter from Maggie, which revealed that she was bidding him farewell. This goodbye note will leave Xander just as unsettled, so he’ll agree to race over to Statesville and stop Maggie’s fatal intentions.

Sadly, Maggie will have already carried out her suicide attempt when Xander runs in. Once Xander sees Maggie hanging in her sheets, he’ll rip them down and free her neck.

It’ll take some work to get Maggie breathing again, but Maggie will finally start coughing and gasping for air again. It’ll be a huge relief to Xander, who couldn’t bear to break the horrifying news of Maggie’s death to Sarah.

Thankfully, Xander won’t have to since Maggie’s going to make a full recovery. Maggie should be especially grateful to Xander when she finds out she’s innocent later this week!

Until then, Orpheus (George DelHoyo) will abduct David Ridgeway (Kyler Ends) and leave Rafe Hernandez (Galen Gering) on another desperate mission to find his boy.

Since John Black (Drake Hogestyn) has also been snatched, Marlena Evans (Deidre Hall) and Rafe can help each other. Days of Our Lives spoilers say Rafe and Marlena will come together for an information trade. They’ll bring each other up to speed on their own situations and contemplate how Orpheus operates.

Marlena’s expected to pay a massive ransom if she wants John back, but will Orpheus really return his hostage? Orpheus would much rather take Marlena’s money and just kill John instead, so that fear should be in the back of Marlena’s mind.

We’ll keep you posted on all the hottest DOOL news and updates. Days spoilers say some wild moments are in store, so don’t miss all the action. CDL’s your go-to source for interesting Days of Our Lives spoilers, updates and news posts.