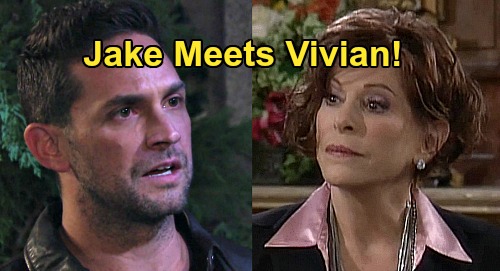 Days of Our Lives (DOOL) spoilers tease that Vivian Alamain (Louise Sorel) is set to make her spring comeback soon. Naturally, that means Vivian will come face to face with Jake Lambert (Brandon Barash). Vivian should be in for quite a shock when she sees this dead ringer for Stefan DiMera (Brandon Barash).

DOOL fans know Vivian was devastated over Stefan’s death, especially since he gave his life for hers. Stefan dove in front of Vivian to save her from Lani Price’s (Sal Stowers) bullet. Sadly, Stefan was declared brain dead at the hospital later.

However, Gabi’s already been battling doubts about Stefan’s “death.” Since so few Salemites turn out to be dead-dead, Gabi had to wonder if Stefan might’ve survived. She’ll be even more certain that’s what happened thanks to the existence of Jake.

Gabi feels like Stefan is lying about his identity – and that’s an intriguing option to consider. We wouldn’t put it past Stefan to pretend he’s Jake and lie to Gabi. There might be some reason why Stefan feels Gabi has to be protected.

Of course, Stefan also loved his mom dearly and would want to protect her, too. It’s doubtful Vivian would be in the loop on Stefan’s survival – at least if Days of Our Lives takes this deceptive route.

It’s also possible Jake is genuinely in the dark on Stefan as he claims to be. Jake may truly have no idea why he looks so much like Stefan, but does Vivian have any answers?

Gabi will surely hope so! Vivian can at least confirm if Stefan might’ve had a twin she didn’t mention before – yet another son for Stefano DiMera (Joseph Mascolo). It’d be weird for Vivian to keep that a secret, but weird things happen when rewrites come along.

If Vivian insists she gave birth to a twin-less Stefan, that’s also worth knowing. It’d narrow things down and hopefully help move this story forward. Naturally, the door’s always open for Vivian to know more than she’s letting on.

This is Vivian we’re talking about! She’s devious and full of secrets, so she may be more connected to all the Jake drama than she seems to be. It all depends on how Days wants to take this hot plot.

Days of Our Lives spoilers say some stunning moments are ahead in Salem. Are you looking forward to Louise Sorel’s return as Vivian Alamain? It should be fun to see Vivian’s first interaction with Jake!

As other Days news emerges, we’ll have plenty of updates to deliver. DOOL fans will want to stay tuned for the Vivian mayhem. CDL’s where to be if you want sizzling Days of Our Lives spoilers, updates and news.