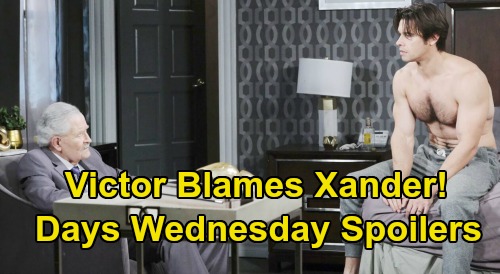 They’ll probably hope they can figure out where Sarah landed through the Titan pilot. Kristen and Brady will be especially concerned since their future with Rachel is on the line.

Sarah fully intends to keep “Mickey” forever, so it’s important to find her while the trail’s hot. Brady and Kristen certainly don’t want to Sarah to disappear with Rachel for good!

Days spoilers say Xander will realize Sarah’s in Paris soon, but he’ll face Victor’s wrath for now. Victor will blame Xander for letting the baby switch scheme blow up, so he’ll really let his partner in crime have it.

Over with Chad DiMera (Billy Flynn) and Abigail DiMera (Kate Mansi), they’ll end up bickering over this Sarah situation. Kristen is Chad’s sister, so there’ll be some level of family loyalty. Plus, Chad will probably reflect on Gabi DiMera (Camila Banus) changing Charlotte DiMera’s paternity test results once upon a time.

Even going back to Thomas DiMera, Clyde Weston (James Read) made sure the initial results said Ben Weston (Robert Scott Wilson) was the father. In other words, Chad definitely knows what it’s like to have a child kept from him. It’s not exactly the same thing, but Chad can still put himself in Kristen’s shoes.

However, Abigail will undoubtedly focus on Rachel’s well-being. She knows Kristen’s done some horrible things, so she may defend Sarah for getting the heck out of town and protecting the baby. In Abigail’s opinion, she may not think Kristen’s capable of being the caring mom that Rachel needs.

Chad and Abigail will spar over the Sarah issue, but Days of Our Lives spoilers say they’ll kiss and make up soon enough. In the DiMera Enterprises office, Li Shin (Remington Hoffman) will turn his chair around and reveal that he’s not, in fact, Stefan DiMera (Brandon Barash).

Gabi momentarily thought Li might be Stefan, but she’ll shake off the confusion and focus on the task at hand. Days of Our Lives spoilers say Gabi will push herself as the best CEO candidate. She’ll want to put herself back on the throne, so Li will hear Gabi’s pitch and give her some hope.

Unfortunately, Gabi should be out of luck once Chad and Abigail come along to make a pitch of their own. “Chabby” will score a big victory by the end of the week, so Gabi will just have to deal with it.

As other Days details come in, we’ll have other hot updates for you. It sounds like some great DOOL drama’s coming up! CDL will have plenty of sizzling Days of Our Lives spoilers, updates and news to check out, so be sure to check back frequently.