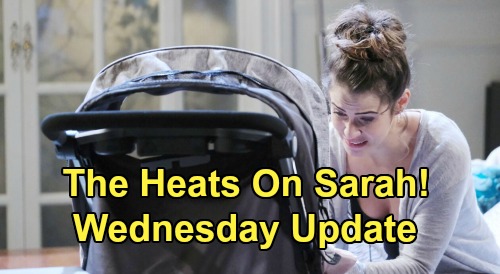 Days of Our Lives (DOOL) spoilers update for Wednesday, April 22, teases that Chad DiMera (Billy Flynn) and Abigail DiMera (Kate Mansi) will find themselves sparring over Rachel DiMera Black. Chad may feel like it’s wrong for Sarah Horton (Linsey Godfrey) to take off with a baby that isn’t hers, but Abigail will likely have a bit more compassion.

Perhaps Abigail will consider how she’d feel in Sarah’s position. Abigail couldn’t imagine giving up Thomas DiMera or Charlotte DiMera, so she may understand Sarah’s actions on some level. However, it looks like Chad will back up his sister, Kristen DiMera (Stacy Haiduk). Chad should be in Brady Black’s (Eric Martsolf) corner as well since he can relate in a way.

Due to doctored paternity test results, Chad was deceived about both Thomas and Charlotte. It’s a terrible thing to have someone manipulate the situation and try to keep children away from you. Once Abigail and Chad argue about the matter, they’ll eventually settle their conflict and put it behind them.

Meanwhile, Days of Our Lives spoilers say the conflict certainly won’t be settled between Victor Kiriakis (John Aniston) and Xander Kiriakis (Paul Telfer). In fact, it’s just getting started! DOOL viewers can expect Victor to blast Xander with everything he’s got on Wednesday. Victor will think Xander’s at fault for the baby swap consequences that are playing out right now.

Sarah’s on the run with Rachel, and Maggie Kiriakis (Suzanne Rogers) will learn this switch news soon if she hasn’t already. There’s a ton of pain going on and much more’s to come.

While Victor blames Xander for that, the other key baby swap players will await updates. Kristen, Brady, Nicole Walker (Arianne Zucker) and Eric Brady (Greg Vaughan) will all hope Sarah and Rachel are found ASAP.

The Titan pilot surely knows where he landed and dropped Sarah off, so he could become a crucial part of the story. Sarah’s actually hiding out in Paris, so Days viewers will see her there with Rachel in the coming episodes. Until then, let’s talk about Gabi DiMera (Camila Banus) and her fight to protect Stefan DiMera’s (Brandon Barash) legacy.

Gabi just appeared at the DiMera Enterprises office, where she was surprised to see someone who resembled Stefan from the back. However, Li Shin (Remington Hoffman) is the one in that chair, so he’ll whip around and greet Gabi before long. Days of Our Lives spoilers say Gabi will put the Stefan mix-up behind her and concentrate on scoring the CEO spot.

Gabi will want to make Stefan proud by fighting her way back on the throne. It seems Li will like Gabi’s pitch, but Chad and Abigail are poised for a victory before the week’s over.

To further complicate Gabi’s life, she’ll see Stefan’s reflection in a store window on Thursday. Some events in Wednesday’s episode could set that up, so stay tuned to see the latest Gabi developments.

It looks like some great Days bombshells are brewing. DOOL fans won’t want to miss what’s in store. CDL will have other Days of Our Lives spoilers, updates and news to deliver, so don’t forget to stop by frequently.