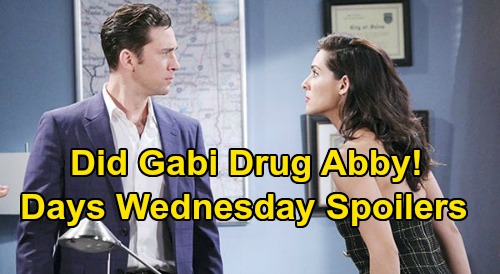 Hope Brady (Kristian Alfonso) will step out before Kayla helps Steve slip that patch back on. Kayla’s the only person close to Steve who’s really seen his wound and knows him this intimately. There’s a certain level of trust here, so that’ll reignite their spark. It looks like Kayla and Steve will nearly kiss, but they’ll end up pulling back when Hope returns.

After Kayla gets Steve’s release papers, he’ll mention that he’ll be staying at Hope’s place for a while. Part of Kayla will wish Steve was going home with her instead, but she’ll try to put this intense patch experience behind her.

Kayla will concentrate on her future with Justin Kiriakis (Wally Kurth) for now, but that’ll prove more difficult in the coming weeks.

In the meantime, Chad DiMera (Billy Flynn) will launch a tirade about Gabi DiMera (Camila Banus). Since Gabi’s got an ax to grind, Chad will be convinced she’s behind Abigail DiMera’s (Kate Mansi) hallucinations. Days of Our Lives spoilers say Chad will insist Gabi must’ve been the one to drug Abigail.

Chad will confront Gabi and hurl accusations, but she should deny any wrongdoing. It’s not like Gabi really had a chance to do much scheming yet. Abigail started hallucinating while Gabi was busy vowing payback in the cemetery. There’s no way Gabi carried out any kind of drugging plot that fast.

With that in mind, Chad and Abigail will have to consider other options. It won’t be easy to crack this case, but they’ll put their heads together and hope for the best.

Next, Orpheus (George DelHoyo) will continue his discussion with John Black (Drake Hogestyn). He just pointed out that if Victor Kiriakis (John Aniston) dies from his stab wound, both of their sons could be on the hook for murder.

Orpheus suggested that maybe they could help each other, so he’ll elaborate on that in Wednesday’s DOOL episode. Days of Our Lives spoilers say Orpheus will make an offer, which John will eventually accept.

That could be a risky deal, especially since we know Orpheus will kidnap John during May sweeps. John may be walking right into a trap!

Other Days spoilers say Evan Frears aka Christian Maddox (Brock Kelly) will drop a bomb. Zoey Burge (Kelly Thiebaud) wants Evan to tell her whatever he’s hiding so she can help. It’s important for Zoey to know what she’s up against. The last thing Zoey wants is to be blindsided in court.

Evan probably won’t confess everything, but he’ll at least tell Zoey part of the story. Zoey’s sure to be stunned by Evan’s admission, but she’ll try to wrap her head around it and focus on the custody battle ahead.

We’ll bring you updates as other Days details emerge. It sounds like some twists and turns are coming up in Salem! CDL’s your go-to source for Days of Our Lives spoilers, news and updates, so don’t forget to stop by again soon.