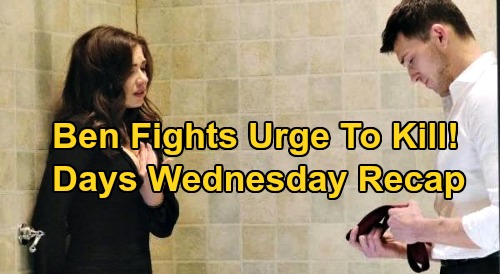 Days of Our Lives (DOOL) spoilers recap for Wednesday, August 26, reveal that Jake Lambert (Brandon Barash) was lounging in his room at the DiMera mansion, when Gabi DiMera (Camila Banus) entered and announced that they were going to Kansas City for dinner on DiMera business. Jake balked, saying that he had plans to take Gwen (Emily O’Brien) to dinner.

Gabi insisted that they go, since the DiMera investor liked him so much and she didn’t want to lose ground to Chad DiMera (Billy Flynn). Jake continued to resist, even when Gabi threw one of Stefan DiMera’s (Brandon Barash) suits at him.

Jake thought that Gabi didn’t like for him to wear Stefan’s clothes, and Gabi lamented that making sure she had a secure job was important, since she might have to fight with Will Horton (Chandler Massey) and Sonny Kiriakis (Freddie Smith) over Ari Horton (Sydney Brower).

Jake and Gabi sat on the bed together, and Gabi explained about Will and Sonny wanting to take Ari to Arizona. Gabi said the she needed to prove that she had a home and a livelihood in Salem – plus she couldn’t lose Ari after losing Stefan. Gabi said that she missed Stefan, especially when she looked at Jake’s face. Gabi kissed Jake passionately.

Soon, the hearing began, and the judge wanted to know where Sami’s attorney was. Sami said that she was going to represent herself.

Justin started in, presenting Allie Horton’s (Lindsay Arnold) letter to the judge. Sami tried to object and then proceeded to ramble. The judge told Sami that her objection was actually an argument.

Sami kept blundering as she tried to represent herself, and the judge told her she was on thin ice. The judge retired to her chambers to read Allie’s letter, then she returned and said that the letter wasn’t legally binding, but that she would give it weight.

The judge then vacated Sami’s restraining order and granted temporary custody of the baby to Nicole and Eric, who were thrilled. Sami then blurted out that Nicole was an unfit mother, and that it wasn’t the first time she had stolen a baby.

Justin explained that Nicole did her time for stealing Sami’s baby all those years ago, but Sami then blurted out that Nicole was also guilty of murder. Nicole looked horrified.

At the Hernandez house, Rafe Hernandez (Galen Gering) held his dad Eduardo Hernandez (A Martinez) at gunpoint, wondering what he was doing there. Rafe mentioned that Eduardo had been released from prison a year ago, and the two men proceeded to bicker.

Eduardo mentioned Dario Hernandez (Jordi Vilasuso) and his criminal inclinations, then he asked about Gabi.

Rafe told his father that he was working on a case right now that involved Eve Donovan (Kassie DePaiva), and Eduardo said that Rafe should go easy on Eve. Rafe balked, listing all of Eve’s crimes.

Eduardo said that Rafe couldn’t go back to work, because they needed to go to Mexico asap, or else they’ll both be dead soon.

At the cemetery, Hope Brady (Kristian Alfonso) told Eve that she had a warrant for her arrest. Hope cuffed Eve and took her into the Salem PD. There, Eve gloated about the “serious consequences” for Hope.

Hope rattled off Eve’s crimes, including trying to kill Ben Weston (Robert Scott Wilson). Eve said that she never tried to kill Ben, and that she wanted him alive so he could continue his work.

Hope assumed that Eve was toying with her, but Eve went on saying that she had brainwashed and programmed Ben to kill Ciara Weston (Victoria Konefal). “I want him to suffer the way he made me suffer,” Eve told Hope.

Finally, Hope realized that Eve was serious, as Eve described how she and Vincent (Michael Teh) gave Ben a cocktail of psychotropic drug and post-hypnotic suggestions.

Hope scrambled to put out an APB on Ben, and she physically threatened Eve, then realized that this wouldn’t work. Hope then begged Eve not to make her go through the pain of losing a child again. Eve looked sympathetic toward Hope.

Later, Eve sat alone in the interrogation room looking at Paige Larson’s (True O’Brien) obituary. Eve talked to Paige, saying that Paige was right, and that she had told Hope where Ben and Ciara were. “I hope it’s not too late,” Eve said.

At Paige’s abandoned dorm room, Ciara was terrified but told Ben that this wasn’t him, and that he could never hurt her. Ben flashed back to his torture and conditioning, hearing Eve’s voice say “Kill Ciara, end your pain” over and over.

Ciara told Ben through tears that whatever was going on, they’d get through it. Ben said that he had to do this – it’s who he is.

Ben flashed back to his torture again, and he said that Eve told him that she wanted him to suffer and that now he would because he was going to kill her. Ciara asked when Ben spoke to Eve, but Ben didn’t remember anything else that Eve said.

Ciara begged Ben to remember what happened at the place where she and Hope found him, and Ben said, “They made it so I liked it.”

Ciara was horrified as she realized that Vincent and Eve brainwashed Ben. Ciara urged Ben to fight it, and she took out her phone to call Hope, but Ben threw the phone across the room, then he threw Ciara onto the bathroom floor and wrapped the necktie in his hands.

Ben said that he was sorry through tears, then suddenly he left the room and slammed the door shut, telling Ciara to lock the door and not to let him in.

Ciara yelled through the door that she locked it, and she yelled for Ben to call Hope. Ben took Ciara’s phone and saw their wedding photo on it, which triggered something from his torture/conditioning sessions. Ben threw the phone down and screamed, “Why is this happening?”

Ciara cried on the other side of the door, then when Ben had quieted down a little, she opened the door and found Ben on the bed in the fetal position. Ben lunged at her and screamed to shut the door, which she did.

Ciara again asked Ben through the door to call Hope, and Ben looked at the photo on Ciara’s phone, threw the phone down, and proceeded to try to bust down the door to the bathroom.

As Ben yelled that he was sorry, he busted a hole in the door and unlocked the door while Ciara cried from inside the bathroom.

A short while later, Hope arrived outside the dorm room. She knocked and yelled for Ben and Ciara, then kicked the door in. Hope looked in the room, weapon drawn, and looked in horror inside the room.

That was a great episode of Days of Our Lives, and there’s plenty more coming tomorrow. Be sure to tune in to the NBC soap tomorrow so you don’t miss any of the action. And don’t forget to check CDL frequently for the latest Days of Our Lives spoilers and news.