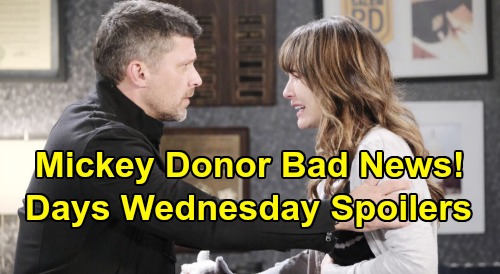 Days of Our Lives (DOOL) spoilers for Wednesday, February 12, tease that Ciara Brady (Victoria Konefal) will make it over to the DiMera gatehouse with Ben Weston (Robert Scott Wilson). Days fans know Ciara showed up on her motorcycle to save Ben after his escape. That getaway went off the rails since Ben got shot in the leg, but Ciara can hopefully patch him up.

However, Ben will still have a bad feeling about all this. He had no idea Clyde Weston (James Read) was bringing Ciara into the plan, so he’ll voice his displeasure on Wednesday.

Although Ben will appreciate Ciara’s assistance, he won’t like that she’s putting her own freedom on the line. Ciara could get in major trouble for helping a fugitive, but she’ll insist on standing by her man.

While Ciara and Ben get settled in at their hideout, “Steve Johnson” aka Stefano DiMera (Stephen Nichols) will seek one of his own. He’ll urge Kayla Brady (Mary Beth Evans) to smuggle him out of the hospital and stash him somewhere else.

Before Kayla can make a final decision on that, Justin Kiriakis (Wally Kurth) will show outside the office. That’ll leave Kayla with another tough choice to make.

Kayla won’t be thrilled about lying to Justin, but she’ll ultimately put “Steve” first. Days of Our Lives spoilers say Kayla will get rid of Justin and help “Steve” get to a safe location ASAP. She’ll make it clear that she completely disapproves, but she can’t turn her back on “Steve” when there’s so much history between them.

Meanwhile, Sarah Horton (Linsey Godfrey) and Eric Brady (Greg Vaughan) will get updates on the bone marrow donor search. Days of Our Lives spoilers say there’ll be some new developments, so what does that mean for Mickey “Mackenzie” Horton?

It doesn’t look like a donor match will be found until next week, so Eric and Sarah may get some bad news for now.

Brady Black (Eric Martsolf) didn’t have to get tested since his information was already on file. Nicole Brady (Arianne Zucker) and Kristen DiMera (Stacy Haiduk) also headed to the hospital for testing, so Wednesday’s news may involve some results.

As Mickey’s true parents, Kristen and Brady obviously have the best shot at being matches. Sadly, neither one of them may work for Mickey.

Of course, this would leave the door open for Tate Black (Colin and Kyle Shroeder) to be a match, so we’ll see how it goes. As for Kristen, she’ll keep a secret from Brady in Wednesday’s DOOL episode.

That may involve some startling dreams about their baby, Rachel Isabella DiMera Black. Kristen and Brady have no idea that a switch went down, but Kristen’s dreams about an alive Rachel could be a good clue.

It sounds like some exciting scenes are coming up. We’ll keep you posted as other Days details emerge. Stay tuned to DOOL and don’t forget to check CDL often for the latest Days of Our Lives spoilers, updates and news.