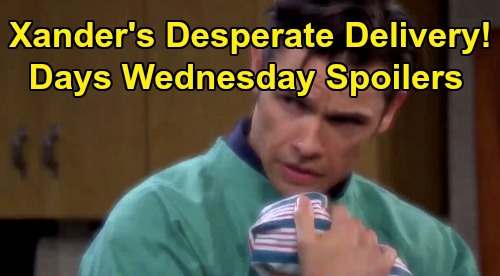 Days of Our Lives (DOOL) spoilers for Wednesday, January 22, tease that we’ll see the outcome of that shocking crash, but things aren’t quite as they seem! DOOL fans watched as Will Horton (Chandler Massey) got distracted by his phone in the car. Meanwhile, Adrienne Kiriakis (Judi Evans) was busy honking her horn and yelling at another driver to get out of her lane.

It wasn’t long until brakes squealed and panic erupted, so you’re probably thinking Will looks awfully guilty! However, that’s kind of the point. For Will to believe he’s responsible, it had to look this way. Days has only shown one side of the story so far – and it’s the one most Salemites believe.

Xander Kiriakis (Paul Telfer) and Victor Kiriakis (John Aniston) already admitted Will Horton (Chandler Massey) is innocent. Days of Our Live spoilers confirm Maggie Kiriakis (Suzanne Rogers) is actually to blame for this crash. No matter how DOOL twists all this around, it’s clear from all available info that Will didn’t kill Adrienne.

On Wednesday, Days of Our Lives spoilers say the flashbacks will continue. Will’s eventually going to be horrified by what he thinks he did. As for Xander, he’ll find Maggie passed out drunk in her car with a liquor bottle. Since Xander framed Will somehow, he’ll apparently do something that adds to Will’s assumption that he’s guilty.

However, Xander will have to turn his attention to Sarah Horton (Linsey Godfrey) soon. He’ll deliver her baby at the crash site before they ultimately head to the hospital, where tragedy will strike once again. Sarah’s little girl will die, which will set up the baby swap that’s set to happen later this week.

In the meantime, Kristen DiMera (Stacy Haiduk) will face a complicated delivery. She’ll end up losing consciousness, but Brady Black (Eric Martsolf) will urge Kristen to wake up and fight for their child’s life.

It turns out the baby’s umbilical cord is wrapped around her neck, so there’ll be concerns about her suffocating. Brady will encourage Kristen to push before this becomes a dire situation – and she will.

Kristen and Brady will be overjoyed by the birth of their healthy baby girl. Sadly, that baby switch we mentioned will ultimately bring devastation.

Speaking of devastation, Kayla Brady (Mary Beth Evans) will deliver crushing news to Justin Kiriakis (Wally Kurth). Days viewers got a small taste of that scene a while back, but this time DOOL’s going to offer the full picture.

Grief will hit Justin fast and hard after Kayla informs him there’s nothing else they could do. Days of Our Lives spoilers say Adrienne will be gone, so the difficult mourning process will start for her family.

These flashbacks are sure to bring some emotional moments! We’ll give you updates as other Days details emerge. Stay tuned to DOOL and don’t forget to check CDL often for the latest Days of Our Lives spoilers, updates and news.