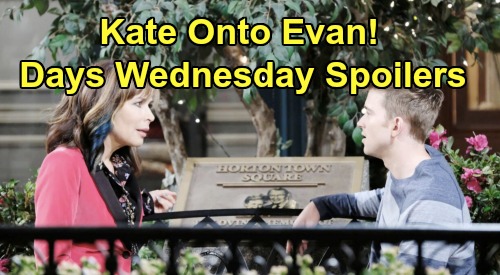 Days of Our Lives (DOOL) spoilers for Wednesday, January 8, tease that Gabi Hernandez (Camila Banus) will dance around the truth. Lani Price (Sal Stowers) couldn’t come clean about the pacemaker drama, but she did make a surprising admission to Eli Grant (Lamon Archey). She told him all about how Gabi made her get down on her knees and beg for Stefan DiMera’s (Brandon Barash) heart.

Of course, that’s nothing compared to boobytrapping Julie Williams’ (Susan Seaforth) pacemaker and threatening to blow up her heart! Even so, Eli was taken aback and even a bit disturbed by this begging revelation. He defended Gabi, but he’ll definitely want to hear Gabi’s side of the story in Wednesday’s DOOL episode.

Eli understands that Gabi was grieving, but he still won’t think her demand was right. He’ll push Gabi to admit she made Lani beg on her knees – and she probably will. However, Gabi will likely play up that grieving angle and convince Eli that’s all there was to it.

Eli may fear that Gabi’s keeping something else from him, but Gabi will hide her trail and hope Eli never finds out about her death threats.

Other Days of Our Lives spoilers say Lani will rely on JJ for help. She won’t give JJ all the Gabi details just yet, but she’ll indeed confide some of her troubles. Lani may admit she’s plotting against Gabi and needs a place to hide out. Gabi has to believe Lani’s long gone or else things might not end well for Julie.

JJ will still be somewhat confused, but he’ll trust that Lani needs his assistance. He should help Lani seek refuge somewhere until she can figure out her next move. Over with Kristen DiMera (Stacy Haiduk), she’ll gloat about her upper hand.

Naturally, Kristen will be eager to push Nicole’s buttons and grow closer to Brady Black (Eric Martsolf) through this position. Nevertheless, Nicole won’t think Kristen should get her hopes up about winning Brady over.

She’ll pretend she’s romantically involved with Brady – and Brady will back Nicole up later this week.

Kate’s got a pretty good radar when it comes to people with secrets, so she may think Evan is bad news. Regardless, Kate will wish Will would keep fighting for his marriage.