BY hellodrdavis on May 27, 2020 | Comments: Leave Comments
Related : Days of Our Lives, Soap Opera, Spoiler, Television 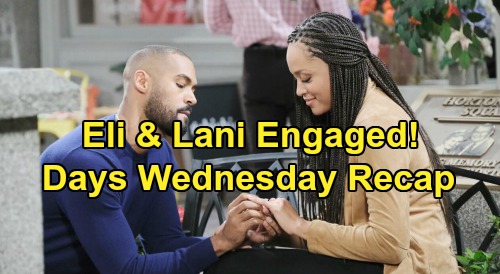 Days of Our Lives (DOOL) spoilers recap for Wednesday, May 27, reveal that Ben Weston (Robert Scott Wilson) and Ciara Brady (Victoria Konefal) got ready for their day at the Salem Inn. Ciara gave Ben some “save the date” cards to hand out at work announcing their wedding. Soon, Lani Price (Sal Stowers) and Eli Grant (Lamon Archey) arrived to get Ben’s statement on Gabi DiMera’s (Camila Banus) near attack on Jake Lambert (Brandon Barash). Ben gave his statement off-screen.

Ciara thought that Lani seemed a bit biased against Gabi, noting that she could understand how Gabi’s grief might have driven her to do something desperate. Ciara then gave Eli and Lani a “save the date” card, and Eli and Lani left.

Ben quipped that he needed to get to work if he was going to save up enough money to get Ciara a proper ring before the wedding, and he took off.

In his bedroom, Jake woke up after having a nightmare about Gabi stabbing him with a syringe. He headed down to work at the garage and flashed back to Gabi telling him that she loves him.

Ben arrived and gave Jake a “save the date” card, then wondered if Jake was still entertaining the idea that he could be Stefan DiMera (Brandon Barash). Jake dismissed the idea as ridiculous.

Jake then told Ben that Gabi had tried to inject him with the same drug she dosed Abigail DiMera (Kate Mansi) with, and Ben didn’t think that sounded right. Ben insisted that Gabi wouldn’t deliberately harm Jake, since she loved Stefan so much. Jake took off, leaving Ben there alone working on a car.

Hope seemed skittish, and Rafe reminded Hope that everyone forgave her for what she did when she was microchipped. Hope said that David was lucky to have Rafe, and Rafe asked Hope to pass along his congratulations to Ciara and Ben.

Eli asked when they were going to get married, and he whipped out a ring box with Lani’s previous engagement ring in it. Eli said that he wants to build a life and a family with Lani, and that he’d been waiting for the right time to ask her to marry him.

Eli said that he hoped that the right moment is now, and he got on one knee and sweetly asked Lani to marry him. Lani happily said yes, and the couple embraced and kissed.

Afterwards, Lani and Eli discussed wedding dates, and Lani looked at the calendar on her phone and said, “Oh, my God.” Eli wondered what was wrong, and Lani said she was late. “Late for what, did you have an appointment?” Eli asked. Lani repeated that she was late, and Eli got the point.

At the police station, Gabi sat in the interrogation room and flashed back to kissing Jake. Suddenly, Jack Deveraux (Matthew Ashford) burst in the room and yelled at Gabi that she ruined Abigail’s life and that she was going to pay.

Jack continued bellowing, and Rafe rushed in and tried to subdue him. Jack went on about how now Abigail had to go to Florida for treatment and be separated from her kids.

Jack finally left, and Rafe asked Gabi if he had been defending a guilty woman. Gabi protested, saying that Wilhelm Rolf (William Utay) had set her up, and that he must have been the one who drugged Abigail.

Rafe said that Rolf was in custody when Abigail was drugged, so it couldn’t have been him. Gabi thought that Rolf must have had someone else do it, and Rafe thought that was a real stretch. Gabi swore she was innocent, and after Rafe left, Jake walked in the interrogation room, much to Gabi’s surprise.

At the Brady Pub, Ciara, Julie Williams (Susan Seaforth Hayes), and Hope sat together. Julie balked a bit at Ciara’s request to have her perform the wedding ceremony, saying that her track record hadn’t been great.

Ciara wondered if Julie was balking because she didn’t approve of Ben and Julie denied it, then agreed to perform the ceremony happily. “What are the odds of something going wrong,” Julie mused. Hope looked worried.

At the DiMera mansion, Abigail and Chad DiMera (Billy Flynn) decided to tell their children about their Florida trip together. They brought in Charlotte DiMera (Olivia and Oakley Rondou) and Thomas DiMera (Cary Christopher), and Thomas was a bit upset because he had seen the suitcases upstairs. Chad and Abigail explained to Thomas that mommy was sick and needed to go see a doctor in Florida.

In age-appropriate terms, Chad and Abigail told Thomas what was wrong with Abigail, and that she was going to be brave and get better. Thomas had some questions along the way, and he told his mom that he loved her and that he’d miss her, which brought Abigail to tears. Chad explained that he was going with Abigail to be her partner.

Soon, Jack and Jennifer Deveraux (Melissa Reeves) entered, while Abigail finished up talking to Thomas. Later, while the kids were out of the room, Jack, Jennifer, and Abigail had some tender moments together, with Jack recounting a story about when Abigail refused to give up when she was learning to ride a bike. Jack told her daughter never to give up and that he loved her.

Finally, Chad came downstairs with the kids’ favorite toys that they wanted their mom to have. Abigail told Jack and Jennifer that she was going to beat this and come back home, and that she was lucky to have the love and support of such an amazing family.

Jack, Jennifer, Abigail, and Chad shared a group hug, and then Chad and Abigail left, as Abigail gazed lovingly at her parents.

That was a great episode of Days of Our Lives, and there’s plenty more in store this week, so stay tuned! We’ll give you updates are more DOOL news comes in. Here at CDL, you can count on all the latest DOOL updates, spoilers, and daily recaps.