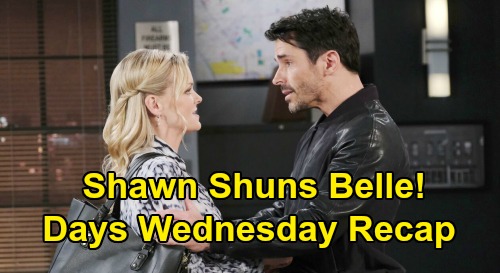 Brady and Rachel Black showed up shortly thereafter, and Kristen was thrilled to be back with Rachel.

Belle took off, and Kristen told Brady that they needed to flee Salem immediately. Brady balked, saying that life on the run would be horrible, and he urged her to stay, but he said that if she fled, then he would go with her.

Ultimately, Kristen decided that she would stay in Salem and fight the charges against her. Brady and Kristen kissed happily.

Jan continued to manipulate Claire by saying they were alike and that nobody believed them. Soon, Belle came along and demanded that Jan get away from Claire.

Jan told Belle about Philip’s arrest, and Belle and Claire took off, with Belle furious with Jan.

Meanwhile, at the police station, Philip griped to Shawn Brady (Brandon Beemer) about being arrested and said it was personal, but Shawn said that since Philip confessed to assaulting Jan, he had no choice. Philip thought that this was payback for hugging Belle before.

Soon, Belle and Claire walked into the squad room and Belle said that she was there to represent Philip, and that Jan was trying to get her hooks into Claire again. Belle and Philip stepped into the interrogation room, and Shawn tried to tell Claire that Jan was a pathological liar.

Claire thought that Shawn was victim blaming, and she shut down the conversation.

In the interrogation room, Belle told Philip that Shawn had to do his job, but Philip needled Belle about Shawn still hating him. Belle said that they needed to stand united against Jan, since she was trying to divide and conquer.

Belle then went out to see Shawn in the squad room, and he gave her the cold shoulder, canceling their dinner date for the evening.

At the Kiriakis mansion, Sarah Horton (Linsey Godfrey) and Xander Kiriakis (Paul Telfer) argued up in their bedroom. Sarah realized that Xander was behind Jan’s decision to press charges against Philip.

Xander eventually admitted that he was, and Sarah blasted him for falling back into his old ways. Sarah said that needed Xander to care passionately about being a decent person, and Xander balked, saying that he didn’t want Philip to come out on top.

Sarah was clear that if Xander went back to his old ways, then it was going to be over between them. Ultimately, Xander agreed to put aside his old, manipulative ways for Sarah’s sake.

Xander called Jan and left her a voice mail saying to drop the charges against Philip, which made Sarah happy. Sarah and Xander then made up and made love.

At Hope Brady’s (Kristian Alfonso) house, Claire was listening to music when Jan walked in the room, having let herself in the house.

Claire looked scared, as Jan said that she had something for Claire, but it turned out to be a photo of Ciara that Claire left in town square. Claire seemed rattled by this.

Somewhere out of town, Hope returned to her hotel room and found the door ajar. Inside was Ben Weston (Robert Scott Wilson), who had tracked Hope down.

Hope explained that she had tracked Vincent Bellman (Michael Teh) to this town, and she asked Ben if he remembered ever seeing Ciara Weston (Victoria Konefal) in the car before it exploded.

Later, Hope got a lead on where Vincent was, and she and Ben took off. Hope and Ben tracked Vincent down somewhere outside, and Ben grabbed Vincent while Hope held Vincent at gunpoint.

Vincent tried to use mind control on Ben, but it failed, and Hope demanded to know where her daughter was and whether she was alive. Ben and Hope fired questions at Vincent, but Vincent would only say that he refused to answer questions without his lawyer present.

Frustrated, Hope cuffed Vincent, and Ben said that they were going to get answers out of him one way or another.

That was a terrific episode of Days of Our Lives, and there’s much more coming this week, so stay tuned! We’ll give you updates as more news comes in. Stick with the NBC soap and don’t forget to check CDL frequently so you don’t miss any of the latest Days of Our Lives spoilers, news, or daily episode recaps.