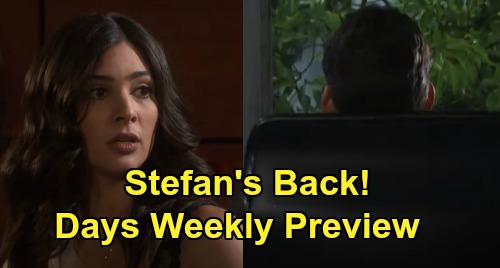 Days of Our Lives (DOOL) spoilers preview teases that viewers are in for an explosive week on three major storyline fronts. The new DOOL preview promo for the week of April 20 to April 24 warns not to miss a day of the action, as there’s going to be some big movement when it comes to Stefan DiMera’s (Brandon Barash) return, the fight for David Ridgeway (Caleb and Kyler Ends), and the baby swap fallout. It’s going to be a big week, so let’s see what’s in store!

First off, the new DOOL promo teases that Gabi DiMera (Camila Banus) will think she’s seeing things. Gabi’s shown in an office – presumably at DiMera Enterprises, although it could be in the DiMera mansion – looking quizzically and saying, “Stefan?” The scene then quickly shifts to a man sitting in a chair looking out the window, and it certainly looks like it could be Stefan.

Now, whether this is real or a figment of Gabi’s imagination remains to be seen. It’s also possible that the man in the chair is someone else, like Li Shin (Remington Hoffman), who’s set to make his first appearance on DOOL this week.

Gabi could be mistaking Li for Stefan here, so it could be a big promo fake out. Viewers won’t want to miss the action this week to see who is actually in that chair!

Next, the promo shifts to the scary situation that Rafe Hernandez (Galen Gering) is facing with respect to David. Rafe has been caring for David for well over a year now, and he’s very attached to the little boy.

Rafe is the only father that David has ever known, but the promo shows Zoey Burge (Kelly Thiebaud) telling Rafe, “David has a father and I’m suing for custody.”

As DOOL viewers know, Zoey is not only Evan Frears aka Christian Maddox’s (Brock Kelly) lawyer, she’s also his big sister. So when Zoey says that she’s suing for custody of David, she could mean she’s suing on Evan’s behalf as his attorney.

Or Zoey could mean that she wants custody of David herself. Given that Zoey’s next of kin to the little boy and probably has a clean record, she’d likely be able to get custody if she tried.

That’s going to leave Rafe horrified, and he’s shown having some tender moments wit David in the preview. It certainly looks like Rafe could be on the verge of losing David, and once he realizes that Zoey is related by blood to David, he’ll probably pretty quickly see the writing on the wall. What will Rafe’s next move be?

Next, the new DOOL promo moves into the baby swap fallout. As DOOL viewers know, Sarah Horton (Linsey Godfrey) has taken baby Rachel Black and fled on the Titan jet.

According to Days of Our Lives  spoilers, Sarah and Rachel will end up in Paris, where they’ll hide out. Rachel is shown in the promo telling Rachel, “I’m never going to let anyone take you.”

But Sarah’s then shown being startled by a knock at the door in the apartment (or wherever) that she’s hiding. Sarah approaches the door slowly and opens it very carefully.

But it doesn’t look like it will be anyone from Salem who’s tracked Sarah down just yet. In fact, it’s more likely that it’s a new character named Jeanne Marie (Christine Kellogg-Darrin), whom Sarah will encounter this week in Paris.

Finally, the new DOOL promo for the week of April 20th deals with a terrible act of violence between Kristen DiMera (Stacy Haiduk) and Victor Kiriakis (John Aniston). According to Days of Our Lives spoilers, Kristen will first turn her fury over the baby switch to Xander Kiriakis (Paul Telfer), whom she’ll royally chew out.

Kristen will be livid that she was led to believe that her baby Rachel died and that she’s been separated from her little girl for all these months. Once Xander gets Kristen’s wrath, she’ll head over to the Kiriakis mansion and confront Victor, who was the mastermind behind the plan to switch babies and make Kristen and Brady Black (Eric Martsolf) think that their daughter had died.

That’s when Kristen will up and stab Victor as he sits in his chair, which the promo shows. According to Days of Our Lives spoilers, Kristen will then leave and go back about her business, leaving Victor in serious jeopardy of dying.

Fortunately, Sonny Kiriakis (Freddie Smith) will find Victor and he’ll be rushed to the hospital for emergency treatment.

It will be interesting to see what kind of problems this ultimately causes for Kristen, who may well be charged with attempted murder at the same time that she needs to be out looking for her kidnapped daughter.

And what’s Brady going to think about his supposedly reformed Kristen having stabbed his grandfather. What a mess!

At any rate, it looks like we’re in for an exciting week, so stay tuned! We’ll give you updates as more DOOL news comes in. Stick with the NBC soap and remember that CDL is your place for the hot new Days of Our Lives spoilers and updates.