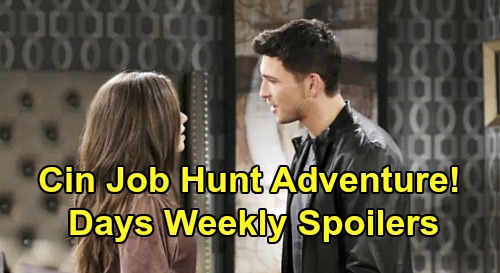 Days of Our Lives (DOOL) spoilers for the week of April 6-10 tease that some stunning moments are in store. For starters, Stefano DiMera (Stephen Nichols) will make a last-ditch effort to stay in Steve Johnson’s body. Although Stefano’s plan won’t pan out, he’ll fight to the bitter end!

There’ll be a big snag during Steve’s procedure and an even bigger one after he awakens. At first, Steve won’t remember his love for Kayla Brady (Mary Beth Evans). There may also be some leftover traces of Stefano’s “essence,” but Marlena Evans (Deidre Hall) will work with Steve to complete his transformation.

Of course, that’ll be after Marlena’s own surgery. It’ll be back to business as usual for “Doc,” who’ll share a romantic reunion with John Black (Drake Hogestyn). Over with Justin Kiriakis (Wally Kurth), he’ll open up to Jennifer Horton (Melissa Reeves) about his deep fears. Justin has found love again with Kayla, so he’ll be terrified of losing her to Steve.

Jennifer won’t really want to pick a side here, but she’ll give Kayla some good advice eventually. The main thing is to follow her heart. If Kayla does that, she’ll know which man she should be with. Hint-hint – it’s Steve! “Stayla” is a DOOL supercouple, so…sorry, Justin. It won’t happen overnight, but Steve and Kayla will indeed get back together.

Meanwhile, the truth about Mackenzie “Mickey” Horton will devastate Eric Brady (Greg Vaughan). Eric adores Mickey, but he’ll soon realize he has to give her up. Mickey is actually Rachel DiMera Black, so that’ll be a tough blow for Eric to process.

Although Eric fully believed Mickey was his daughter, she’s Brady Black’s (Eric Martsolf) daughter with Kristen instead. Nicole Walker’s (Arianne Zucker) shocker will crush Eric to the core, but he’ll just have to adjust. Days spoilers say Eric will share an emotional goodbye with Mickey and plan to tell her true parents everything.

Naturally, Sarah will need to get updates as well. In fact, it’ll be a pressing matter since Sarah’s wedding to Xander Kiriakis (Paul Telfer) is rapidly approaching. Eric and Nicole will stop Sarah before she says her vows and deliver the bombshell. However, Sarah’s next move should be one they didn’t expect.

Despite receiving the swap news, Sarah will let her wedding proceed as planned. That either means Sarah will reject “Ericole’s” claims or plot to blow up Xander’s world at the wedding. Either way, Days of Our Lives spoilers say disaster’s brewing!

Before this wedding begins, Xander will ask Sonny Kiriakis (Paul Telfer) for a favor. Will Xander want Sonny to be his best man? It’s not like Xander has a long list of buddies to call on, so he may hope family ties will mean something. As for Xander and Victor Kiriakis (John Aniston), they’ll enjoy a special bonding scene before any marriage chaos erupts.

Days of Our Lives spoilers say an enraged Ben will grip Evan by the throat. He’ll almost strangle Jordan Ridgeway’s (Chrishell Stause) killer, but Ciara will be there to settle things down.

It sounds like Ciara will remind Ben of what’s at stake. They need to focus on their bright future together, so Ben has to ignore Evan and let the legal system handle him. Several hot DOOL stories are getting even hotter! CDL will have other scorching Days of Our Lives spoilers, updates and news, so be sure to stop by often.