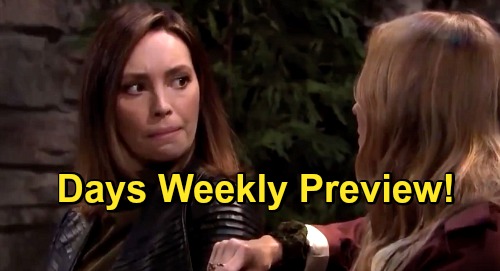 Days of Our Lives (DOOL) spoilers preview teases that viewers are in for a big week, December 7-11, on the NBC soap. The new preview promo for the week of December 7 foreshadows some big moments coming up on the show.

First off, viewers will get to see Chloe Lane (Nadia Bjorlin) and Philip Kiriakis (Jay Kenneth Johnson) catch up, which should be an interesting reunion. It appears that Philip will still want to pursue something with Chloe, but she might not be as keen to jump right in as Philip.

According to Days of Our Lives spoilers, Chloe and Philip’s reunion after “The Last Blast” series on the DOOL app will turn out to have been short-lived because Philip started hanging out with Mimi Lockhart (Farah Fath) again.

Apparently, Philip and Mimi did their fair share of gambling, which is how Philip got back into trouble with gambling debts, and that took him away from Chloe.

Well, now Philip and Chloe may get their second chance – that is, if Philip’s partnership with Ava Vitali (Tamara Braun) doesn’t get in the way.

Next, Steve Johnson (Stephen Nichols) and Kayla Brady (Mary Beth Evans) will visit their son Joey Johnson (James Lastovic) in prison with some great news – he’s going to be sprung from prison all because Ava is alive. The promo shows some happy moments between Steve, Kayla, and Joey, which look heartwarming.

But the road to getting Joey free from prison won’t be an easy one. Ava’s going to want a deal – Joey can go free only if Kayla doesn’t press charges for her kidnapping at Ava’s hand all those years ago.

Kayla won’t like it, but she’ll agree to free her son, and from the looks of the promo, Kayla will take out her anger on Ava, as she’s shown trying to strangle her nemesis.

“My son has been sitting in prison for four years because of you!” Kayla seethes at Ava as she reaches for Ava’s throat. Steve is shown trying to break up the tussle, and he’s not going to like the situation any more than Kayla does, it seems.

Next, the new Days of Our Lives promo shows Gwen Rizczech (Emily O’Brien) taking out her frustrations on some poinsettias in the park.

Of course, Gwen’s situation as she tries to manipulate Chad DiMera (Billy Flynn) and Abigail DiMera (Marci Miller) will only get more difficult in the days to come as she tries to get Chad to believe that Abigail is sleeping with Jake Lambert (Brandon Barash).

It looks like the stress will really get to Gwen, hence her outburst.

Interestingly, it looks like Gwen will get Jennifer Deveraux (Cady McClain) involved in beating up some poinsettias on her own accord. Of course, this makes some sense, since Jennifer is super frustrated over Jack Deveraux’s (Matthew Ashford) one-night stand with Kate DiMera (Lauren Koslow). Jennifer needs to vent!

Next, the previw moves to an interesting scene with Xander Kiriakis (Paul Telfer) and Charlie Dale (Mike C. Manning), during which Xander calls Charlie out. “You’re hiding something, and I want to know what it is,” Xander demands.

Charlie looks like he doesn’t know what to say, and there’s a good reason for that, given that Charlie is now working for Philip to spy on Xander. It’s a real mess, and Charlie’s smack dab in the middle of it.

Back with the DiMeras, Jake is shown happily telling Chad that there’s “someone else” in the picture. Of course, Jake means Kate, but this will surely feed into Chad’s insecurities about Jake and Abigail possibly having an affair – insecurities that are being stoked by Gwen.

The good news for Gwen is that she seems safe from suspicion in the drugging since no one saw her in Salem at that time…that is no one but Julie Williams (Susan Seaforth Hayes).

The new Days of Our Lives promo also shows Ava and Tripp Dalton (Lucas Adams) getting to know each other a little better.

DOOL spoilers say Tripp will really appreciate his mother’s support and steadfast belief where Allie Horton’s (Lindsay Arnold) rape allegations are concerned, but he’ll probably soon realize some issues with his mom – like her obsession with Steve and her tendency to cling to the past.

The promo shows Ava hugging Tripp and saying, “If only Patch were here, everything would be perfect.” Tripp looks pretty weirded out by that comment.

Finally, Bonnie Lockhart (Judi Evans) is shown unnerving Justin Kiriakis (Wally Kurth) and Jack at the Brady Pub while commenting about how she and Jennifer had fun with those random men over at Julie’s Place.

Viewers will remember that Jack and Justin were horrified to see Jennifer and Bonnie whooping it up and flaunting their good time. It looks like Bonnie will think that she’s helping Jennifer by making Jack squirm a bit – and maybe she will be! Jack needs to squirm after what he did!

Well, it looks like we’re in for an exciting week, so stay tuned to the NBC soap! We’ll be sure to give you updates as DOOL news comes in. Remember to keep CDL at the ready for the latest Days of Our Lives spoilers, updates, and news. We’ve got you covered!