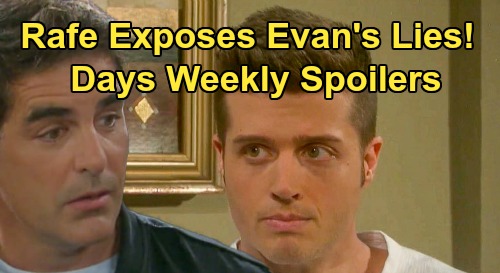 Days of Our Lives (DOOL) spoilers for the week of February 24-28 tease that some startling revelations are on the way. Thanks to memory flashes, Maggie Kiriakis (Suzanne Rogers) will be deeply unsettled. She’ll suspect she was behind Adrienne Kiriakis’ (Judi Evans) crash, so she’ll confront Victor Kiriakis (John Aniston) and Xander Kiriakis (Paul Telfer).

That’ll leave Maggie crumbling over the news that she indeed killed Adrienne. Sonny Kiriakis (Freddie Smith) will blast Maggie once he gets updates, especially since Will Horton’s (Chandler Massey) been suffering behind bars. Victor and Xander will certainly get an earful for letting Will go down for this.

As for Justin Kiriakis (Wally Kurth), he’ll get a heartfelt apology from an emotional Maggie. She’ll be a mess over all this, so we’ll see how Justin handles it. Later, Days spoilers state that Will’s going to have a big surprise. It looks like he’ll score his freedom and show up for a reunion.

Sadly, Ben Weston (Robert Scott Wilson) will have his own freedom yanked away. He’ll be hauled back to prison, where he’ll await his imminent execution. Ben will bid farewell to Clyde Weston (James Read), but you can bet Ciara Brady (Victoria Konefal) will keep fighting. She can’t bear the thought of Ben dying, so she’ll keep working to clear his name.

Ciara will indeed score vital information that could help Ben. It’ll tie in with Jordan Ridgeway’s (Chrishell Stause) true killer, but time will obviously be of the essence. Ciara will need to move fast for this to make a difference in Ben’s fate.

As for Rafe Hernandez (Galen Gering), he’ll have a heated confrontation with Evan Frears (Brock Kelly). There’s a good chance Rafe will finally be alerted to that background check issue.

Rafe will rip into Evan for deceiving him, but how deep does that deception run? There’s a good chance Evan is both David Ridgeway’s (Caleb and Kyler Ends) father and Jordan’s murderer.

Other DOOL spoilers say Gabi Hernandez (Camila Banus) will avoid a prison sentence through a plea deal. She’ll only agree to be Mackenzie “Mickey” Horton’s bone marrow donor if she walks free.

Since Gabi will be the only match, it’ll leave Eric Brady (Greg Vaughan) and Sarah Horton (Linsey Godfrey) in a bind. They won’t want Gabi to get off scot-free, but have to support this plea deal for Mickey’s sake.

Days spoilers say Gabi will waltz out of the Salem PD as a free woman, but she’ll be fired from DiMera Enterprises. When Gabi lands in Stefano DiMera aka Steve Johnson’s (Stephen Nichols) path, she’ll also get attacked! It’s clear that although Gabi won’t face legal consequences, she’s still going to pay the price for her actions.

Next, Eli Grant (Lamon Archey) will soften toward Lani Price (Sal Stowers). He was hurt by Lani’s deception, but he knows her heart was in the right place. Eli will decide not to let anything stand in the way of their love, so DOOL spoilers say he’ll officially reunite with Lani. That news will leave Julie Williams (Susan Seaforth Hayes) and Valerie Grant (Vanessa Williams) tickled pink.

Finally, Days of Our Lives spoilers say Stefano will demand a deal with Justin. He’ll want to trade Kayla Brady (Mary Beth Evans) for Marlena Evans (Deidre Hall), but that’s not going to work for Justin or John Black (Drake Hogestyn). They’ll both want Kayla out of danger, but it won’t fix anything to make Marlena a hostage instead.