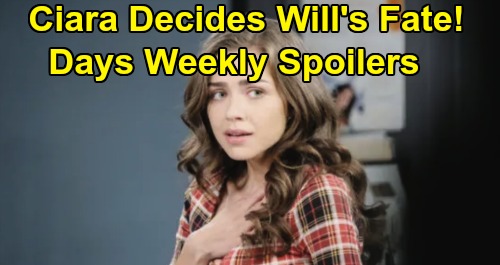 Days of Our Lives (DOOL) spoilers for the week of January 13-17 tease that big drama’s brewing in Salem. First, Ciara Brady (Victoria Konefal) will struggle with a bombshell. After Victor Kiriakis’ (John Aniston) admission that Will Horton (Chandler Massey) was the framed innocent man, Ciara will have a lot to mull over.

This confession won’t help Ben Weston (Robert Scott Wilson), but it could certainly help Will. While Ciara processes what she’s learned, Clyde Weston (James Read) will make a risky suggestion. He’ll think a father-son escape mission would be a good idea.

DOOL spoilers say Clyde will make his pitch, but Ben may think that sounds crazy. Still, Ben may not have a lot to lose since he’ll have no more legal hope. Over with Will and Sonny Kiriakis (Freddie Smith), they’ll have a difficult meeting in prison. It’ll be tough to sign the divorce papers, but that’s what they’ll plan to do at this meeting.

It sounds like Will’s going to sign and learn a stunning secret soon after. Ciara will pay Will a visit, so she may reveal what she’s found out from Victor. Will Ciara admit that Will’s innocent and was set up? Drunk Maggie Kiriakis (Suzanne Rogers) was Adrienne Kiriakis’ (Judi Evans) true killer, although it was an accident in her case as well.

As for Eli, he’ll battle old feelings for Lani and use Gabi to cover them up. Eli will try to convince himself that he can put Lani behind him. He’ll pop the question to Gabi and hope this will give him some closure on the Lani situation.

We should also talk about Stefano DiMera aka “Steve Johnson” (Stephen Nichols). He’ll give Kristen DiMera (Stacy Haiduk) plenty to ponder thanks to his true identity shocker. Kristen will undoubtedly support her father in any form though, so Stefano can probably trust her.

Later, Princess Gina Von Amberg aka “Hope Brady” (Kristian Alfonso) will scheme with Stefano. They’ll come up with another plan, which involves getting John Black (Drake Hogestyn) away from Marlena Evans (Deidre Hall). “Steve” will convince John that Stefano isn’t in Salem, so they’ll start a search out of town.

Of course, it’ll just be a wild goose chase since Stefano himself will be part of the hunt. The point is this will give Princess Gina time to stir the pot and set up some “Jarlena” trouble. Elsewhere, JJ Deveraux (Casey Moss) will get sneaky. Days spoilers say JJ will hope to disable Gabi’s pacemaker app, but something tells us he’ll hit a snag or two.

Eric Brady (Greg Vaughan) and Sarah Horton (Linsey Godfrey) will also head home during the week ahead. Sadly, they’ll get some updates on Mackenzie “Mickey” Horton that leave them quite upset.

As for Brady Black (Eric Martsolf), he’ll once again find himself sucked in by temptation. Kristen will want to speak with Brady about the night their daughter died, so that’ll bring them closer. fraught