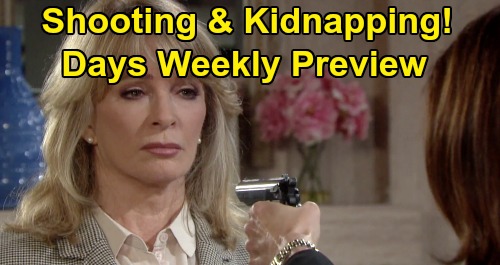 Days of Our Lives (DOOL) spoilers preview teases that the action will be really heating up on the NBC soap. The new DOOL promo for the week of January 27th is all about family taking on family, friends becoming dangerous enemies, and someone literally left hanging! It’s going to be an exciting week, so let’s get right into it!

First off, the promo addresses the revelation that Will Horton (Chandler Massey) has just heard from Ciara Brady (Victoria Konefal) – that Maggie Kiriakis (Suzanne Rogers) is the person who ran Adrienne Kiriakis (Judi Evans) off the road.

It looks the reality will soon set in for Will, as he realizes that he’s innocent, and that he’s been framed in an elaborate coverup.

Of course, for Will, shock will probably soon turn to anger toward the people who did this to him – Victor Kiriakis (John Aniston) and Xander Kiriakis (Paul Telfer).

According to Days of Our Lives spoilers, Will and Ciara will quickly start debating whether or not they should come forward with the truth. They might not agree about how to handle this going forward, and it looks like Ciara will want to immediately tell everyone the truth.

Will might have other ideas on how to proceed, however. DOOL spoilers indicate that Will and Ciara will soon fill in Ben Weston (Robert Scott Wilson) about the situation, so maybe he’ll be able to offer some advice on how to best proceed.

Of course, they’ll know that if they do go public with the fact that a drunk Maggie was responsible for Adrienne’s death, there will be serious repercussions. It will be a lot to consider.

Next, the new Days preview promo addresses the terrifying situation that Marlena Evans (Deidre Hall) will soon find herself in. As DOOL viewers know, Princess Gina Von Amberg aka Hope Brady (Kristian Alfonso) and Stefano DiMera aka Steve Johnson (Stephen Nichols) have made a plan to make John Black (Drake Hogestyn) and Marlena each think the other is dead. In their warped minds, it’s the only way to get what they want.

Well, the promo shows Princess Gina holding Marlena at gunpoint and saying “You need to die” in full Princess Gina mode. Now, whether Marlena will realize that it’s Princess Gina that she’s dealing with and not Hope remains to be seen.

But at any rate, Days of Our Lives spoilers indicate that Marlena will end up being taken captive by Princess Gina and apparently taken to the lair for safekeeping.

Meanwhile, John will be on the road with “Steve” in Europe when he lures John to a hideout, where Dr. Wilhelm Rolf (William Utay) suddenly materializes and appears to shoot “Steve.”

As CDL reported, this will be a ruse to scare John, and ultimately they’ll knock John unconscious and take him back to Salem, where he’ll end up tied up and hanging from chains in some dark, damp room.

The DOOL promo shows kidnapped John in this precarious situation, where soon Princess Gina will show up, remove his blindfolds, and tell him that Stefano has killed Marlena.

It definitely sounds like this is not a week to be missed, and that by the end of it, both John and Marlena will be facing total devastation thinking that the other is gone for good.