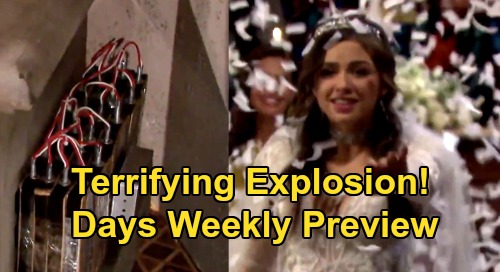 Days of Our Lives (DOOL) spoilers preview teases that viewers are in for the fourth summer DOOL wedding, that of Ciara Brady (Victoria Konefal) and Ben Weston (Robert Scott Wilson). And while the new DOOL promo is a bit short on details and simply shows seven quick scenes in rapid succession, it’s definitely bone-chilling as it foreshadows a pretty major disaster at the wedding – a huge explosion!

The promo begins with normal-enough scenes, of the church doors opening and of Ciara and Rafe Hernandez’s (Galen Gering) view as they begin their walk down the aisle.

That view is of the smiling faces of Ben, his best man Will Horton (Chandler Massey), Hope Brady (Kristian Alfonso), and all the other wedding attendees. Ciara and Rafe are shown as well, side by side as they’re about to make their way into the sanctuary. So far, everything seems in order.

But then, the scene quickly flashes to a very sophisticated-looking bomb that’s hidden in the church. We should note that while there’s been plenty of suspicion to go around about whether Claire Brady (Olivia Rose Keegan) has been doing things to deliberately sabotage the wedding, this bomb looks like the work of a real expert, with numerous wires and set to do some serious damage!

Even though Claire might initially be suspected once the explosion goes down, the likelihood of Claire planting this type of bomb is pretty slim.

The promo continues, with quick flashes of Ben and Ciara reaching out their hands for each other as confetti flutters around the sanctuary and people are smiling in the background, indicating that the wedding will conclude before the explosion happens.

This meshes with other DOOL spoilers, saying that the wedding will be a touching and tender family event with plenty of happy tears to go around.

It looks like Ciara is blown backwards in the direction of the altar, as Shawn Brady (Brandon Beemer). Doug Williams (Bill Hayes) and others sitting toward the back of the chapel cower back from the blast of the explosion.

Finally, the doors to the sanctuary are shown closing abruptly, as a red glow can be seen behind them. Of course, this all indicates that whomever set the explosion was likely someone who wanted to do maximum damage and trap the wedding party and guests in the chapel after the explosion.

It looks like it will be a scary scene all the way around.

That’s all that the promo shares about the big “Cin” wedding, so we’ll have to tune in for all the details on how this disaster unfolds. We’ll give you updates as more DOOL news comes in.

Stick with the NBC soap and don’t forget to keep CDL at the ready for the latest Days of Our Lives spoilers and news. And check out our daily DOOL recaps as well!