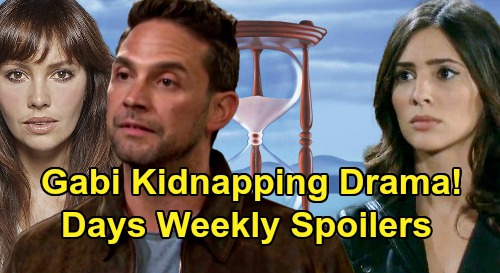 Days of Our Lives (DOOL) spoilers for the week of June 1-5 tease that some great action’s coming up in Salem. First, Marlena Evans (Deidre Hall) will get a phone call that leaves her taken aback. There’s a good chance Claire Brady (Olivia Rose Keegan) will be the one who makes that call, so that should send Marlena over to Bayview for a chat with her granddaughter.

Claire will insist she’s completely recovered and deserves an early release. Although Marlena will have some concerns about approving that, she’ll agree to mull it over.

Later, Marlena will fill John Black (Drake Hogestyn) in on Claire’s request. John may admit it’d be nice to see Claire rejoin society – but only if she’s truly ready! “Doc” knows best, so John will trust her to make the right decision here.

Back with Claire, she’ll do some confiding as well. A fellow patient named Gwen (Emily O’Brien) will listen to Claire’s troubles and offer advice to her new friend. Unfortunately, that advice probably won’t be what Claire needs to hear! It turns out Gwen is actually Jake Lambert’s (Brandon Barash) crazy former flame, so the plot thickens.

Ben Weston (Robert Scott Wilson) will hear all about Gwen in the week ahead and will even offer to help find her. Gwen could help Jake get out of the dangerous trouble he’s in, so she’ll be a key player in the coming months. For now, Jake’s mess will extend to Gabi DiMera (Camila Banus), who’s about to get kidnapped.

Jake will reel over Gabi’s abduction, so look for him to be on edge as he explains the situation to Ben and Ciara Brady (Victoria Konefal). Over with Zoey Burge (Alyshia Ochse), she’ll face off with Orpheus (George DelHoyo). Orpheus may warn Zoey to win the custody battle against Rafe Hernandez (Galen Gering) or else!

Although Orpheus isn’t fond of Zoey for her betrayal, he’d still rather keep David Ridgeway (Kyler Ends) in the family. Orpheus may argue that since Zoey couldn’t keep Evan Frears aka Christian Maddox (Brock Kelly) on the outside, she owes it to her brother to raise his son for him.

As the custody battle gets underway, Rafe will be glad to have Hope Brady (Kristian Alfonso) in his corner. Days of Our Lives spoilers say Rafe will do everything in his power to keep David with Hope’s help.

Meanwhile, Sarah Horton (Linsey Godfrey) will unleash her wrath on Victor Kiriakis (John Aniston) over the baby switch. As for Brady Black (Eric Martsolf), his behavior will prompt concern for Ciara and Eric Brady (Greg Vaughan).

Brady’s motives will also be questioned when John confronts him, so Brady will likely lie about the real reason he wants control at Titan. This is all about destroying the company, but Brady may keep John in the dark on that for now.

Other Days of Our Lives spoilers say Lani Price (Sal Stowers) will battle dark fears about her pregnancy. If Lani had to face the death of another child, it might be more than she could take. Lani’s baby drama will force her to tackle some issues she thought she’d moved past.

Despite Lani’s worries, she may wind up sharing the baby news along with Eli. It’s still a bit early to spread the word, but it’d be OK to tell Abe Carver (James Reynolds) and Julie Williams (Susan Seaforth Hayes). They’re family, so they might even be able to help Lani with this challenge she’s up against.

Back with Sarah, she’ll be frustrated when Xander Kiriakis (Paul Telfer) once again pushes for another chance. Sarah has made it crystal clear that Xander isn’t getting one, so she’ll probably just have to repeat herself.

After Steve realizes wedding bells will soon be ringing for Justin Kiriakis (Wally Kurth) and Kayla Brady (Mary Beth Evans), he’ll drown his sorrows. Later, Steve will get drunk enough to mull over the idea of baring his soul to Kayla.

Across town, Days spoilers say Will Horton (Chandler Massey) and Sonny Kiriakis (Freddie Smith) will take steps toward adding a baby to their family. It won’t be an easy process, but they’ll be eager to go on this journey together. As other DOOL details emerge, we’ll deliver updates.

It's a summer of love in Salem, with weddings for four couples and a baby for Will and Sonny. Watch #DAYS, weekdays on @NBC. pic.twitter.com/5Z6YPVoRN7