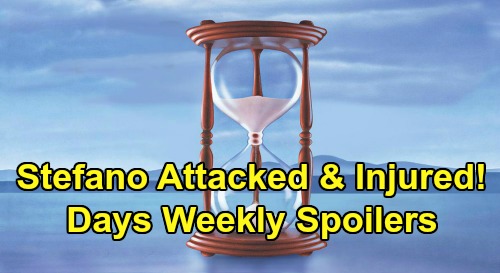 Days of Our Lives (DOOL) spoilers for the week of March 23-27 tease that we’ll see some exciting action along with some desperate pleas. First, Sonny Kiriakis (Freddie Smith) will push Evan Frears aka Christian Maddox (Brock Kelly) to do what’s right. Sonny may remind Evan of the close moments they shared and insist that he wasn’t faking that warmth. There’s still some good in Evan.

Sonny will try to reach that silver of goodness and convince Evan to reunite Rafe Hernandez (Galen Gering) with David Ridgeway (Caleb and Kyler Ends). Unfortunately, Evan may not be willing to budge. Over with Eric Brady (Greg Vaughan), he’ll decide to have an honest discussion with Sarah Horton (Linsey Godfrey). It seems likely this conversation will be due to Sarah’s engagement news.

Once Eric gets updates on Sarah and Xander Kiriakis’ (Paul Telfer) impending nuptials, it’ll all become pretty real for Eric. He’ll realize Xander’s going to be Mackenzie “Mickey” Horton’s stepfather and could potentially be in her life forever. Eric won’t be certain he’s OK with that, so he’ll express his concern to Sarah.

Of course, this isn’t Eric’s call to make and it doesn’t matter anyway since Mickey isn’t even his biological child. Sadly, Nicole Walker (Arianne Zucker) won’t be able to prove that just yet. Xander will derail the DNA test results and make it look like Kristen DiMera (Stacy Haiduk) isn’t a match for Mickey. Although Xander will hope to put the issue to rest, Nicole won’t stop digging.

Days of Our Lives spoilers say Nicole will open up to Abe Carver (James Reynolds) about her suspicions. Abe will be instrumental in keeping Nicole focused on her goal. Perhaps Abe will argue that Nicole has to trust her instincts on this. Everyone in Salem knows Xander can’t be trusted. Nicole has every reason to keep pursuing this, so she’ll go with her gut and try to prove the babies were swapped.

Other Days of Our Lives spoilers say Ben Weston’s (Robert Scott Wilson) prison release will thrill Ciara Brady (Victoria Konefal). Their reunion will pack in plenty of romance, so “Cin” fans won’t want to miss these sweet scenes. As for Chad DiMera (Billy Flynn), he’ll be under suspicion in the week ahead. He’s a devious DiMera bot right now thanks to Stefano DiMera aka Steve Johnson (Stephen Nichols).

With Anna DiMera’s (Leann Hunley) assistance, Abigail DiMera (Kate Mansi) will try to figure out what the heck’s going on. Abigail will know Chad’s not behaving normally, but her investigation could lead to trouble. Speaking of trouble, Stefano will land in lots of it thanks to his wedding plans, in fact he’ll be attacked and injured by Anna DiMera (Leann Hunley)! Days spoilers say Stefano will take Marlena Evans (Deidre Hall) to a special location for a beautiful marriage proposal.

Stefano will turn on the charm as he pops the question at a recreated Maison Blanche. Marlena’s uneasy reaction will annoy Stefano, but he won’t be deterred. Stefano will announce that he’s getting married that very night, so Kristen and Tony DiMera (Thaao Penghlis) will fear this is a bad idea. They’ll be right since John Black (Drake Hogestyn) will be closing in on Stefano and his wedding venue!

Brady Black (Eric Martsolf) and Hope Brady (Kristian Alfonso) will join John as he works to find Marlena. Some DOOL wedding bombshells are brewing, so stay tuned. Finally, Hattie Adams (Deidre Hall) will grow frustrated over unrequited love. Hattie wants to believe she has a shot with Roman Brady (Josh Taylor), but it’ll soon be crystal clear that she doesn’t.

Once Hattie understands that, she’ll make a significant choice regarding her future. Days spoilers state that Hattie will ultimately leave Salem behind, so DOOL fans will have to say farewell. As other news becomes available, be sure to check out all our hot updates. CDL will have other Days of Our Lives spoilers and scoops to share.