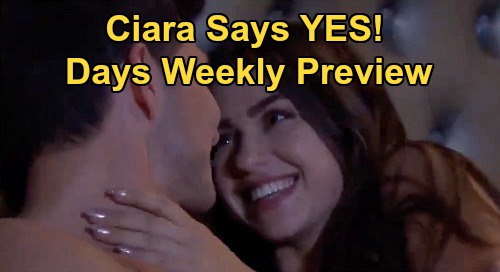 Days of Our Lives (DOOL) spoilers preview teases that romance will soon be in the air for several key DOOL couples. The DOOL promo preview for the week of March 30 to April 3 is all about the endless love coming up in Salem, so let’s get right into it! The promo starts with Jennifer Deveraux (Melissa Reeves) sharing some important wisdom with Kayla Brady (Mary Beth Evans).

Kayla is in a strange situation right now. She’s currently in a committed relationship with Justin Kiriakis (Wally Kurth), and by all accounts they’re happy and content. But Kayla has also learned that Steve Johnson (Stephen Nichols) probably never wanted to divorce her in the first place.

Rather, Steve was captured and Dr. Wilhelm Rolf (William Utay) performed a procedure on him so that Stefano DiMera’s (Joseph Mascolo) consciousness was implanted into Steve’s brain. And as soon as Kayla can see to it that the procedure gets reversed, she should get Steve back. This will present Kayla with a big relationship problem – namely, which man should she choose? Justin or Steve?

Well, in the DOOL preview, Jennifer is shown telling Kayla to let her heart choose the man that she wants to spend the rest of her life with. Now, it’s hard to imagine Kayla choosing anyone other than Steve, and the promo also shows Kayla kissing Steve in a hospital bed. Could this mean that her choice will be Steve in the end?

Next, the new Days of Our Lives preview for the week of March 30th shows an interesting scene between Xander Kiriakis (Paul Telfer) and Sarah Horton (Linsey Godfrey), in which they appear to be dressed up for their wedding ceremony. Sarah’s holding a bouquet and Xander’s all dressed in a suit, but Sarah doesn’t look very happy about the situation.

There’s the possibility that this could be a dream sequence, since Days of Our Lives spoilers say that Xander will soon have a troubling dream about Sarah. And given that Xander is currently keeping a doozy of a secret from Sarah – that her baby actually died months ago – he could be having a guilt dream about Sarah confronting him over his devious actions.

The DOOL promo also shows a quick but important sequence involving Ciara Brady (Victoria Konefal) and Ben Weston (Robert Scott Wilson). As they’re in bed canoodling, Ben says “Yes?” And Ciara excitedly replies, “Yes!” They giggle and fall back on the bed together happily. Days spoilers indicate that a “Cin” engagement is coming, so could this be it?

We don’t see a ring or a formal marriage proposal (i.e., with Ben getting down on one knee) in the promo, but Ben and Ciara definitely look like they’re agreeing to something important here.

They may be so happy and excited about getting on with their life together that they decide right then and there to get married. Ongoing DOOL spoilers say that “Cin” will look for jobs in the coming weeks, so that would mesh with a spur-of-the-moment engagement.

Abigail DiMera (Kate Mansi) and Chad DiMera (Billy Flynn) also make an appearance in the promo, as they appear to be happily reunited after the whole Stefano brainwashing ordeal.

As DOOL viewers know, Stefano brainwashed Chad after slipping some drug into his drink, then baiting him with a trigger phrase: “la familia.” That led Chad to do all sorts of awful things.

But thankfully, it seems that all of the Stefano drama will soon be behind everyone – after all, it looks like Kayla and Steve will be reunited, as we previously discussed. And that comports with Days of Our Lives spoilers saying that Stefano will vow to rise again. It looks like we’ll see the last of Stefano for a while. And once Stefano gets neutralized, Chad should get back to normal pretty quickly.

Finally, the preview video shows some quick flashes of happy love scenes, including John Black (Drake Hogestyn) and Marlena Evans (Deidre Hall) hugging, which is nice to see since Marlena has been in terrible danger from Stefano. She and John should share a nice reunion one Dr. Rolf removes that chip from Marlena’s brain and she gets back to normal.

And for good measure, the promo shows Jack Deveraux (Matthew Ashford) and Jennifer kissing happily, as well as a quick flash of Lani Price (Sal Stowers) and Eli Grant’s (Lamon Archey) recent pillow fight. It’s great to see some happy moments for these couples – they deserve it!

It It looks like we’re in for an exciting week on Days of Our Lives, so stay tuned! We’ll give you updates as additional DOOL news comes in. Stick with the NBC soap and remember that CDL is your trusted source for the latest soap spoilers, recaps, and updates.