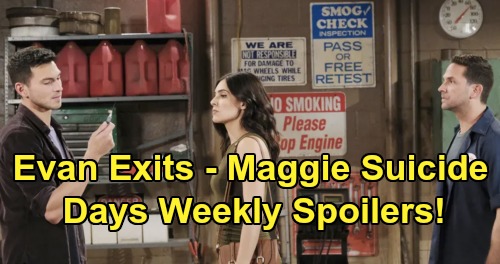 Days of Our Lives (DOOL) spoilers for the week of May 18-22 tease that some startling moments are on the way in Salem. For starters, Orpheus (George DelHoyo) will cause major kidnapping drama. Thanks to John Black’s (Drake Hogestyn) abduction, Marlena Evans (Deidre Hall) will discuss Orpheus with Rafe Hernandez (Galen Gering). They’ll mull over how Orpheus operates and try to figure out his next move.

Unfortunately, Rafe won’t anticipate Orpheus snatching David Ridgeway (Kyler Ends), which is exactly what’ll happen. DOOL spoilers say Rafe will kick off a desperate mission to find David, and he’ll get help from a surprising ally. Zoey Burge (Alyshia Ochse) will assure Rafe that she’s in his corner, but it won’t be easy to make Rafe believe it.

While Zoey pushes Rafe to trust her, Marlena will seek some assistance of her own. Days spoilers say Hope Brady (Kristian Alfonso) and Steve Johnson (Stephen Nichols) will be asked to help with John’s rescue mission. Naturally, Steve and Hope will want to do whatever they can!

Elsewhere, Orpheus will point his gun at John and ramble about what’s in store. It turns out Orpheus will have some pretty impressive plans for the future – starting with all the money he’s going to get for John’s safe return. There’s no guarantee Orpheus would keep his end of the bargain, so that’s something that’ll concern John during this hostage crisis.

As for David, he’ll find a way to help John at some point. It’ll be interesting to see how the little fella comes through for John, but it won’t be enough to score John’s freedom. Steve and Hope will undoubtedly have to pitch in on that.

Other Days of Our Lives spoilers say Evan Frears aka Christian Maddox (Brock Kelly) will hit the exit door. It seems prison awaits, so Evan will share some goodbye scenes with Sonny Kiriakis (Freddie Smith) before he departs. There’ll be a lot to talk about since Orpheus and Evan set Maggie up to take the fall for the crash.

Of course, that crash killed Adrienne Kiriakis (Judi Evans), so Sonny and Justin Kiriakis (Wally Kurth) will get some jaw-dropping news in the week ahead. Will Horton (Chandler Massey) thought he was responsible for the accident before the Maggie shocker came out, so Justin and Sonny will be stunned to learn there’s been another development.

While Sonny and Justin get the scoop, Maggie will send a farewell note to Victor Kiriakis (John Aniston) and plan to kill herself. Xander Kiriakis (Paul Telfer) will learn Maggie’s plan and arrive at Statesville to find Maggie hanging from her sheets.

Maggie won’t be responsive when Xander pulls her down, but he’ll work to resuscitate her and give Sarah Horton (Linsey Godfrey) her mother back.

Days of Our Lives spoilers say Xander will be successful, but rescuing Maggie won’t help him win Sarah over. Xander will face more devastation when Sarah and Brady Black (Eric Marstsolf) trick him into thinking they slept together.

DOOL fans can also expect Xander to get fired, so he’ll really be having a rough time! Victor will give the job of Titan CEO back to Brady, so Xander will be heartbroken and unemployed.

Over with Ciara Brady (Victoria Konefal) and Ben Weston (Robert Scott Wilson), they’ll enjoy a cake tasting as they plan their upcoming wedding. The road ahead will be a rocky one, but they’ll experience “Cin” bliss for now.

As for Abigail DiMera (Kate Mansi), she’ll find out about a potential treatment that could take care of her hallucinations. Chad DiMera (Billy Flynn) will offer updates so they can make some difficult choices. It looks like Abigail will enter some sort of treatment program in another city, so that should set up her DOOL exit soon.

Finally, Gabi DiMera (Camila Banus) will get grilled about an attack on Jake Lambert (Brandon Barash). Days spoilers say Lani Price (Sal Stowers) will wind up arresting Gabi, so it won’t be long until Gabi’s hauled down to the Salem PD.

It sounds like some exciting stuff’s coming up on the NBC soap. CDL’s where you want to be for fantastic Days of Our Lives spoilers, updates and news posts.