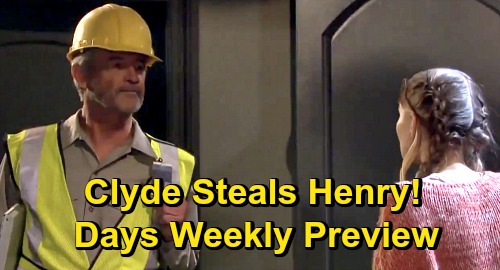 Days of Our Lives (DOOL) spoilers tease that viewers are in store for a big week on the NBC soap. The new Days of Our Lives promo for the week of October 26 is out, and it’s full of some shocking moments that will rock some key Salem residents.

First off, Clyde Weston (James Read) is shown infiltrating Nicole Brady’s (Arianne Zucker) apartment by disguising himself as a utility worker. Allie Horton (Lindsay Arnold) answers the door, as Clyde pretends to be a worker from Salem Gas & Electric.

As viewers are aware, Clyde agreed to do something very special for Orpheus (George DelHoyo), and that special thing will be to kidnap Henry Horton (Jayna and Kinsley Fox), with the goal being to secure leverage over Marlena Evans (Deidre Hall).

Orpheus will soon ask Marlena to free his son Evan Frears aka Christian Maddox (Brock Kelly) from Bayview in exchange for the safe return of Henry. You’ve got to admit, Orpheus knows what he’s doing!

Well, the promo shows Clyde making nice with Allie, then Allie is shown realizing that Henry is gone. Of course, it’s not going to help matters any that all of this is taking place in a blackout, and that the Salem PD is strapped as it is looking for the three fugitives who’ve escaped. Now they’ll also have a kidnapping on their hands!

Next, the promo shows Kate DiMera (Lauren Koslow) angrily telling Lucas Horton (Bryan Dattilo) that she’s going to “find the guy and track him down.” It looks like Kate may have just learned about Allie’s rape allegation, and she’s reassuring Lucas that the guilty party is going to pay for what he did to Allie.

Of course, Kate will no doubt soon learn that Allie has made an outcry against Tripp Dalton (Lucas Adams), and she’ll want to get her hands on Tripp pronto.

But first, Kate’s going to have some other drama to deal with. According to Days of Our Lives spoilers, Kate will end up coming across Clyde as he’s trekking across Salem with Henry.

It won’t take long for Kate to realize that Clyde’s baby is none other than Henry, and the promo shows Kate whipping out a gun and opening fire on Clyde! Will Clyde survive?

Finally, the promo shows a bizarre sequence of events involving Kayla Brady (Mary Beth Evans) and Wilhelm Rolf (William Utay). Kayla is shown walking into a lab, presumably at the hospital, where Rolf is poised and ready to perform a procedure.

According to Days of Our Lives spoilers, Rolf will have an embryo clone of Stefano DiMera (Joseph Mascolo), and he’ll be ready to implant it into a surrogate mother.

“Where are you going to find a woman who would carry Stefano’s clone?” Kayla asks Rolf incredulously. Rolf then laughs maniacally as only Rolf can, and he is shown approaching a frightened Kayla with a syringe, presumably to subdue her.

The final creepy scene is of Kayla lying unconscious in the laboratory, seemingly ready to be implanted with the embryo. Yikes!

It looks like we’re in for an exciting week on the NBC soap, so stay tuned! We’ll give you updates throughout the weekend as DOOL news comes in. Stick with CDL and we’ll keep you informed on all the latest Days of Our Lives spoilers, updates, and news. We’ve got you covered!